To boldly go where no woman has gone before... 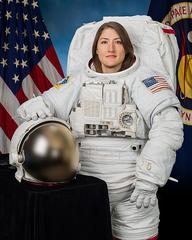 She had spent 328 days (including her 41st birthday on 29 January) on board the International Space Station. During that time, she and fellow astronaut Jessica Meir made history with the first all women spacewalk.

Then on 28 December 2019, Koch set another record; the longest continuous time spent in outer space by a woman,

The previous record of 289 days in space was held by fellow American Peggy Whitson. By the time she landed yesterday, Koch has spent 328 days in space.

Going to outer space is a lot like playing Russian Roulette. There are so many unknowns when it comes to exploring the final frontier, but the physical effects are real. Space travellers lose bone mass living in a zero gravity environment, which can never be fully regained with present technology. The men and women who choose to do so are fully aware of the risks, yet they persist.

So salute Christina Koch for volunteering to be a human guinea pig so that humanity can get a better understanding of our eventual journeys to the stars.

And reflect also, on the brilliance of the Russians, who remain the only country with the technology to safely return space crews to dry land.