Do not underestimate US’s move against the Guptas

Legend has it that Burns was ploughing a field and accidentally destroyed a mouse's nest, which it needed to survive the winter. So he wrote "To a Mouse, on Turning Her Up in Her Nest With the Plough, November, 1785"

Today, we refer to this as the law of unintended consequences — intervention in complex systems creates unanticipated outcomes.

But the more I think about it, the more convinced I become that it is human emotion that triggers such outcomes.

For example, in Hindu legend, Ravana’s lust for Sita led to his downfall. Greed led to King Midas turning his beloved daughter into a statue of gold. Envy led to Cain killing Abel in the book of Genesis.

But we hardly stop to consider that positive human sentiment can have equally powerful consequences. One such trait is friendship.

And it was a friendship between an American businessman and a Russian lawyer more than a decade ago that had devastating consequences this week for our most notorious immigrant family, the Guptas of Saxonwold.

The story goes back to 1996 when William Felix Browder at age 32 founded Hermitage Capital Management, an investment fund and asset management company specializing in Russian markets. Between 1996 and 2007, the Hermitage Fund delivered a 2 697% return.

It’s an astonishing achievement, but what’s more startling is that Bill Browder’s fund did this in part by focusing on exposure of corporate corruption in the companies in which it invested.

Think about it. If we know that a company indulges in corrupt or risky business practices, we will regard it as less valuable than a trusted company.

By exposing such behaviour and weeding out corruption, Browder automatically boosted the value of those companies. This included Russia's largest company Gazprom.

The exposure of corruption was to be Hermitage’s downfall. In 2005, Browder was blacklisted by the Russian government as a threat to national security and deported back to the UK.

A year and a half later, Hermitage Capital's offices in Moscow were raided by Russia's Interior Ministry. They also raided the Moscow office of Browder's US law firm, Firestone Duncan, seizing the corporate registration documents for Hermitage's investment holding companies.

Browder assigned Sergei Magnitsky, head of the tax practice at Firestone Duncan, to investigate the purpose of the raid. Magnitsky discovered that while those documents were in the custody of the police, they had been used to fraudulently reregister Hermitage's holding companies to the name of an ex-convict.

In October 2008, Magnitsky testified to the circumstances of the fraud to the Russian State Investigative Committee. Five weeks later, Magnitsky was arrested at his home by the very officers he testified against.

Magnitsky spent 11 months in custody during which time he was tortured and denied medical attention. On 16 December 2009, he was beaten with rubber batons and tossed into an isolation cell. He was later found dead in his cell.

Incensed at the death of his friend, Browder devoted himself to lobbying US authorities to take action against the perpetrators.

The bill, targeting Russians thought to be complicit in Magnitsky’s death, had two major objectives. The first was to deny them entry to the US. The second was to disconnect those individuals from the global banking system.

The global banking system is controlled by the Society for Worldwide Interbank Financial Telecommunication (SWIFT). It is headquartered in Belgium , but is effectively controlled by the US as all dollar-based currencies are subject to Washington’s approval.

This allows the US to enforce sanctions against countries such as Iran, North Korea, and Venezuela who then cannot send or receive money to third parties.

This Magnitsky act signed into law by President Barack Obama extended such sanctions to these Russian individuals.

In his final days in office, Obama extended the bill to sanction individuals implicated in human rights abuses anywhere in the world. Subsequent to that, other countries passed their own versions of the Magnitsky act including Estonia, Canada, Australia, and the UK.

Fast forward to10 October 2019; the US Treasury announced that it had brought these sanctions upon members of a “significant corruption network” in South Africa that leveraged overpayments on government contracts, bribery, and other corrupt acts to fund political contributions and influence government actions.

We should not underestimate the significance of this move. The Trump administration would not have arbitrarily undertaken such a move without behind the scenes lobbying by President Ramaphosa’s government.

I expect what will now follow will be the inclusion of those names on the Magnitsky lists of other countries too. There will be few places left where the Guptas will be able to travel, and no way to spend their billions.

But consider this: none of this would have happened if corrupt Russians had not murdered Bill Browder’s friend, spurring him to push for the Magnitsky Act. 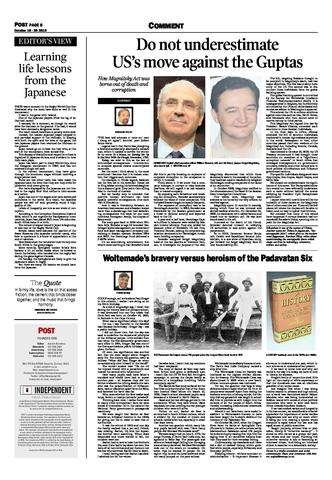