Mashaba’s resignation from DA beginning of the end

“How long do you give Herman Mashaba?” I was asked in a radio interview last week. “Three weeks!” I confidently replied.

In fact, it took three days from my prediction.

At a press conference this week, the mayor of Johannesburg announced his intention to resign from the Democratic Alliance and step down as first citizen, effective 27 November.

Mashaba’s decision to resign is a direct response to the election of former DA leader and former Western Cape Premier Helen Zille as Federal Chair of the party.

“The election of Helen Zille as the Chairperson of Federal Council represents a victory for people in the DA who stand diametrically opposed to my beliefs and value system, and I believe those of most South Africans of all backgrounds,” Mashaba said.

It’s the beginning of the end for a grand experiment, which saw the Democratic Alliance governing Africa’s financial capital since 2016 with the permission of its ideological opponents, the Economic Freedom Fighters.

But let us step back for a moment and put this in perspective.

If Johannesburg were a country, it would be the 9th largest economy in Africa, displacing Ghana and knocking Tanzania out of the top ten.

Joburg’s GDP clocks in at US $76 billion ahead of Ghana ($68 billion), Tanzania ($61 billion), DRC ($48 billion). The city economy is bigger than the combined GDP of our neighbours Botswana, Lesotho, Mozambique, Namibia, eSwatini, and Zimbabwe. And that figure does not include the neighbouring megacities of Ekhuruleni and Tshwane.

The 2016 municipal elections saw the African National Congress lose its majority in Joburg for the first time since 1994. The ANC managed to get 121 seats out of 270, leaving it significantly short of the 135 needed to run the metro.

The DA had even fewer seats at 104. This left the EFF with 30 seats as effective kingmakers, but the EFF had made it clear ahead of the elections that they would not support the ANC under any circumstances.

Herman Mashaba as DA mayoral candidate entered into a Faustian pact with the EFF. The EFF would support Mashaba’s mayoral candidacy but would not enter into a coalition government with the DA.

This effectively left Mashaba running the city, but with the EFF having veto power as no legislation could be passed without EFF support.

This support came at a price though, and that price ran contrary to established DA policy in many cases.

The first thing to go was an ambitious plan by outgoing ANC mayor Parks Tau to build bicycle lanes throughout the city.

EFF leader Julius Malema said people living in suburbs should be patient and allow those living in shacks to get houses before bicycle lanes can be built.

"EFF government will not build bicycle lanes as long as people still live in shacks," Malema said during the launch of the party's election manifesto.

"We want to build houses and roads before bicycle lanes. Let’s get our priorities straight. Let the rich be patient while we give services to the poor."

Second, DA policy favours empowering multiple small businesses to provide services to municipal governments. The EFF favours a big government model with the municipality itself being the primary employer.

As a result, Mashaba began a process of “insourcing”; with workers employed by small businesses being brought onto the city payroll. This included specialized fields such as electrical engineers or security services.

I’ve no doubt Mashaba made those concessions grudgingly, taking a view that cleaning up corruption in the city and pushing inner city rejuvenation were more crucial things to achieve. He increased the operating hours of clinics run by the city and increased their efficiency.

But the cost of these came in failure to deliver those basic services which DA voters Cape Town take for granted. Traffic lights did not get fixed, potholes did not get filled, trash did not get cleaned up.

Moreover, the EFF has been able to hold the DA hostage at a national level with the threat of toppling DA governments in Johannesburg and Tshwane.

What happens to Joburg when Mashaba goes?

The ANC has already begun a process of discussion with the IFP who hold 5 seats as well as other smaller parties. Assuming they bring on board most of the smaller parties (except for the VF+), this would bring them up to 134 seats; still not enough to form a government.

To me, the answer is obvious. The ANC needs to enter into a coalition government with the DA.

The idea might sound absurd, given their diametrically opposed viewpoints. But the ANC and the DA have far more in common, policy-wise, than either of them do with the EFF.

So let the ANC appoint the mayor, let the DA control the city finances. Let the city council become the place to thrash out policy and agree priorities.

The alternative is to let the EFF continue to hold the city hostage. Johannesburg is too important for the country to afford this. If Africa’s financial capital sinks, so does the country. 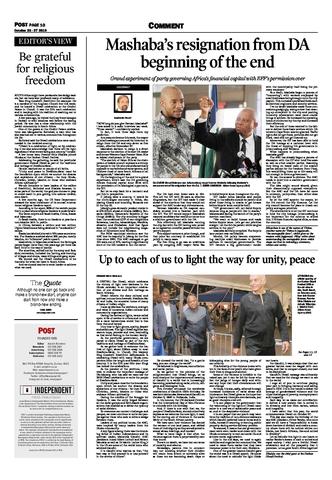