Here’s a question for men who are reading this. When last did you buy underwear?

Surprisingly, the answer to this question is considered to be a reliable indicator of the state of the economy. It was coined in the late 1970s by Alan Greenspan, who went on to become head of the US Federal Reserve from 1987-2006.

Greenspan told a journalist “if you think about all the garments in the household, the garment that is most private is the male underpants because nobody sees it except people like in the locker room and who cares.

“Your children need clothes. Your wife needs clothes. They have to change. The children grow. You need clothes on the outside. But the last purchase that you don't have to make is underpants.”

It makes sense if one thinks about it. When finances get tight, one still has to replace a shirt with a hole in it, but tattered underwear can be worn for a longer period.

Last week, The Economic Times reported that second quarter sales of underwear in India dropped to the lowest levels in a decade. At the same time, the financial world drew back in shock as the US yield curve inverted.

I apologise to all of you have have now drawn back saying what the hell is he talking out. Hear me out. The phrase “inverted yield curve” is important to each and every one of us because it has happened seven times in the past 50 years. In every one of those instances, a global recession followed.

What is a yield curve? It’s a chart showing interest rates over time. Generally, if the world is working the way it should be, the longer the period one invests money, the higher the interest rate one earns.

Why does this happen?

Let’s use our cricket team as an analogy. Six months ago, you might have been willing to bet a lot of money in favour of the Proteas with the likes of Amla and Steyn on the team.

But if I asked you to place a bet today on South Africa’s performance five years from now, you would likely be reluctant, because our current star players will not be on the team in future, and there doesn’t seem to be replacements of that calibre waiting in the wings.

Given the history of the inverted yield curve, markets panicked. The Dow Jones Industrial Average fell by 800 points. By market close on Friday, it had recovered substantially, but was still 1,5% down on the previous week.

So what does this mean for all of us down here in the southern tip of Africa?

Understand that the US economy has been doing fantastically well since Donald Trump became president. Employment levels are at record highs, and earnings for workers across the board have increased relative to inflation. With more people working and more money to be spent, everything becomes great for a period.

But eventually, this peaks. The going is good right now, but when as many people who can be hired have jobs, new spending entering the market declines.

The result of these is that growth slows down. People become reluctant to invest in new ventures. Companies scale back on capital expenditure. So while the US might not be about to hit a full-blown recession, it’s definitely going to slow down.

This in turn is going to affect China, which is already tracking lower growth as a result of Trump’s trade war. Germany and the UK are contracting.

For us in South African with economic growth barely in positive territory, what this means is that foreign direct investment in the near future is even less likely. Thus far in August, foreign investors have been dumping SA bonds at almost R2-billion per day.

On the plus side, global slowdowns nearly always see an increase in demand for gold. If that still holds true, we could see gold hitting $2000 per ounce for the first time.

As individuals, we seem to have already priced in the sensible stuff we need to do. Retail sales are up year on year but we have been scaling back on major purchases. (Example: New vehicle sales are down 3,9% and used vehicles down 2,6%.)

For my part, I will not be buying new underwear in the short term. 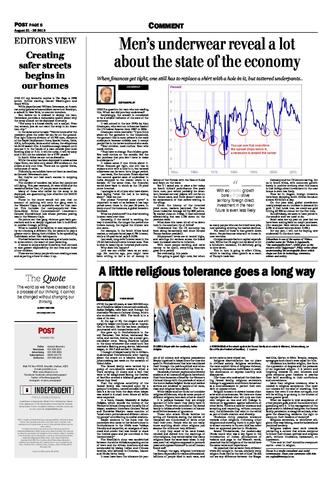