The death of Zimbabwe’s founding president, Robert Mugabe, has opened by a floodgate of memories. The country became independent in 1980, the year I earned my first front-page by-line in this newspaper.

In effect, for almost my entire working career until his being deposed in 2017, Zimbabwe had only one ruler. And that ruler came to symbolise everything that is wrong about democracy in Africa.

Much of what Mugabe did is unforgiveable. The genocide of thousands of mainly Ndebele citizens in Matabeleland is well documented. The plundering of state resources to enrich his family while his country slipped into poverty is well known. Even today, being identified as homosexual in Zimbabwe can be a death sentence.

Against this backdrop, many people may wonder why so many people, myself included, are reluctant to issue blanket condemnation of Robert Gabriel Mugabe. It’s because some of us recall a time when our neighbour to the north held the promise of all we hoped would come true in our own country.

“Zimbabwe has come to mean everything I hoped for South Africa. For the first time, I have the opportunity to explore my fullest potential…”

It was January 1984. Two days before, a colleague and I had crossed the South African border across the Limpopo at Beit Bridge in her Toyota Corolla. Now, we were sitting in the suburban Harare home of Govan Reddy hearing him extol the virtues of the country that had adopted him.

Reddy was then 39 years old, a former Durban academic, historian, and journalist. He left South Africa in March 1981 shortly before a five-year banning order under the apartheid Internal Security Act was due to expire. He left the country by illegally crossing the border into Swaziland. Shortly thereafter, he became the first South African political refugee to be registered with the United Nations in Zimbabwe.

Under the Mugabe government, Reddy became a radio and TV journalist with the Zimbabwe Broadcasting Corporation, driving Current Affairs on the mainly educational Radio Four, while doubling up as an interviewer for several television talk shows.

Reddy’s tale was not unusual. As white former Rhodesians fled Zimbabwe in the wake of independence, many South African expatriates were making a new life in Zimbabwe.

What was not to love? The economy had jumped 20% immediately after independence. Month-to-month inflation was running at less than 0,5 percent. The Zimbabwe dollar was substantially stronger than the Rand. In the ten years following, the economy grew on average 4,5 percent.

But the deeper reasons for so many South Africans being drawn to this new land was that Mugabe at the time was very much a visionary.

Take the case of Manival Moodley. The former schoolteacher of Sastri College in Durban had left the country in 1950 after obtaining a BA in law as a part time student at the University of Natal. In 1957, he was admitted as a barrister –at-law to the Inner Temple in London. In September 1966, he returned to Southern Africa as a resident magistrate in Zambia. At the time of his leaving that country in 1983, he was a judge in the Zambian High Court.

Moodley left because Robert Mugabe invited him to do so. He was 58 years old at the time when I sat down to dinner at his home in Harare.

“I first met the Prime Minister, Mr Mugabe, in Ghana in 1959. I joined Adisadel College on the Cape Coast as a teacher, and he was also teaching there at the time,” the former judge recounted.

That friendship led to Moodley being the first person to come to mind when Mugabe created the country’s first Ombudsman — a high ranking post pioneered by the government of Norway and existing in very few other countries at the time.

The purpose of the Ombudsman, Moodley explained, was to investigate the actions of any government ministry or department where it is alleged a person suffered injustices. The Ombudsman had wide-ranging powers to order the production of documents and to compel government officials to supply information.

“Playing the role of an Ombudsman is very challenging. Obviously, when you are employed by government to investigate the affairs of government and ensure in effect that it doesn’t step out of line, you are treading a fine path. But there are very few countries in the world that have this sort of system and it is to the credit of the government that they were able to create the post.”

Across town, a day later, I was renewing acquaintances with Dr Kesavaloo Goonam, then close to 80 years old. She was Durban’s first resident female doctor in 1936 working as a gynaecologist and obstetrician. Influenced by Mahatma Gandhi whom she had met, she became an outspoken critic of apartheid and was vice president of the Natal Indian Congress.

We were eating dhal and rotis prepared by her as she recounted taking her passport in for renewal at the South African Embassy at Trafalgar Square, where it was confiscated. She was now stateless.

She too, found refuge in Mugabe’s Zimbabwe, working as head of the geriatric ward at a large hospital in the capital. “Here, I am free to do as I like, go where I want, live where I want to, and be a person – not a statistic.”

Back to today, 35 years later, I’m discussing Mugabe’s passing with my Zimbabwean housekeeper. She recounts her mother being beaten by Mugabe’s notorious 5th Brigade during the Matabeleland Massacres while she herself ran to the nearby dam to hide. Her tears are flowing as she recalls her aunt being buried up to the neck, then shot in the head.

She shudders visibly at the word “Gukurahundi”, the Shona word which loosely translates to "the early rain which washes away the chaff before the spring rains" — a callous euphemism for the genocide.

So I do not mourn the monster that he became, but I do mourn the visionary who educated his people and gave true refuge to so many of my fellow South Africans. 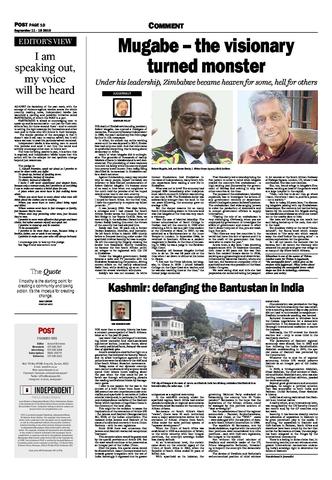