Is Ramaphosa a man of iron?

There’s an old joke which goes: “How do you make a small fortune in the airline business? Start with a large fortune.”

In the 25 years since our country embraced democracy, South African Airways has burned its way through R57 billion in taxpayer funding. It still has close to R10 billion in debt and will need a further bailout of R13 billion to continue operating.

Finance Minister Tito Mboweni assessed the situation very accurately in his medium term budget policy statement recently: “The airline is insolvent and, in its current configuration, unlikely to ever generate sufficient cash flow to sustain its operations.”

Now if SAA were a privately held company, it would be cutting costs, freezing salaries, laying off staff, or simply shutting down.

Instead, it has continued to be propped up with cash injections from taxpayers while rewarding its staff with higher than inflation wage increases.

How did we get here?

For the longest time, our government has persisted in two irrational beliefs. The first is that we need a “national carrier” airline as a strategic resource. The second is the idea that if Ethiopia can build a successful airline, so can we.

There’s a very good reason why Emirates, Qatar Airways, and Ethiopian among others have managed to thrive in the airline business. It comes down to geography.

Picture a map of the world and focus your mind on the locations of Addis Ababa, Doha, and Dubai. These cities are located in a region that can roughly be considered to be the centre of the world.

So Dubai to Sydney is roughly the same flying time as Dubai to New York or Dubai to Rio de Janeiro.

This allows Emirates to position Dubai as a transport hub providing connections to the far ends of the planet.

These airlines also provides multiple flights per day to multiple final destinations within countries. This means that if one flies from Durban to almost any major city in India, there are multiple daily direct flights from Dubai to that city.

This is a competitive advantage that South Africa can never match. There is no reason whatsoever for someone travelling from Lagos to Sydney to do so via Johannesburg.

The middle eastern airlines also have a financial advantage over SAA because the European Union imposes a carbon tax on all incoming flights. The tax is charged according to the distance travelled.

Now add to this mix an aging fleet of aircraft, which are less fuel efficient than newer planes. Also factor in rising costs in dollar terms thanks to a weak rand.

That ride is now about to come to an end. The airline has embarked on a programme to cut costs and retrench 944 staff out of more than 10 000 employees.

The unions were having none of that and last week voted to strike. In response, SAA management cancelled flights for the next 48 hours.

Some international flights have now resumed, but unions are threatening further industrial action.

It may sound clichéd, but this is really the moment of truth for President Cyril Ramaphosa.

Public sector trade unions have held the country hostage since the end of the Mbeki era as Jacob Zuma relied on them to bolster his position. Now, with our economy on the brink of junk status, Ramaphosa has run out of options.

In 1980, Singapore’s founding leader, Lee Kuan Yew, found himself in a similar position. The Singapore Airlines Pilots’ Association demanded a 30 percent increase in basic salaries. To force their position, they embarked on a go slow action.

Here is what President Lee said in response:

“I can tell you that when I met the SIA pilots, I didn’t meet them on TV, I met them face-to-face. Five feet across the table so they can see me, and see whether I’m still vigorous, able to campaign and take them on. Whether it’s worth taking me on.

“And I offered them two choices. Either you stop this intimidation, which is what it was, bringing SIA right down. Disrupting services, ruining its reputation.

“Millions of dollars worth of advertisements and sales ruined within a matter of two weeks.

“I gave them a choice. Continue this and I will by every means at my disposal teach you and get the people of Singapore to help me teach you a lesson you won’t forget.

“And I’m prepared to start all over again or stop it! Get back to work, restore discipline, then argue your case.

“Took them 65 minutes and they decided ok it isn’t worth the fight.

“Why? Because they know they’ll lose.

“And let there be no mistakes about it. Whoever governs Singapore must have that iron in him. Or give it up. This is not a game of cards. This is your life and mine. I spent a whole lifetime building this. And as long as I’m in charge, nobody’s going to knock it down.”

The time has come for our president to find that same iron within himself. 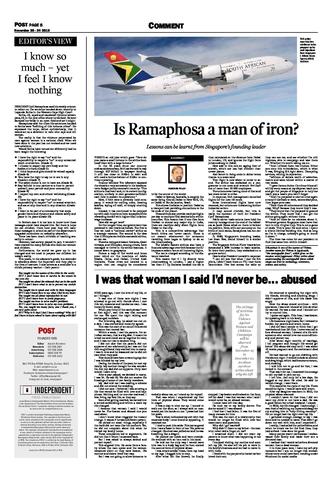