Rise of a new Ottoman empire?

For about 500 years after the passing of Jesus of Nazareth, the people of the Arabian peninsula were a disparate group of tribes; some in established settlements around oases, but mostly nomadic.

There was no definitive shared belief system. Christianity, Judaism, Mandaeism, Zoroastrianism, Mithraism, Manichaeism and many others competed for attention.

This changed dramatically in around the year 622 when the Prophet Muhammad united the tribes under the Constitution of Medina.

It took 8 years of consolidation before Muhammad, with an army of 10 000, marched on and took control of Mecca.

By the time of the death of the Prophet in 632, most of the people of the peninsula had converted to Islam.

The expansion would no doubt have continued if not for a politically disastrous decision of the caliphate to disenfranchise Muslims of non-Arab origin.

The Abbasid Revolution from 746-750 led to the toppling of the Umayyad caliphate.

The Abbasid caliphate which followed gave rise to what is today referred to as the Golden Age of Islam.

The caliph Harun-al-Rashid is well known to those of us who grew up delighting in the tales of 1 001 Nights or The Arabian Nights. These tales gave us the stories of Aladdin and his lamp, Ali Baba and the 40 thieves, Sinbad the Sailor. Baghdad was the epicenter of an unprecedented global growth in science, culture, and art.

This came to an end in 1258 when the Mongol empire sacked Baghdad.

The fourth caliphate was established only two centuries later when the Ottomans conquered the Mamluk Sultanate (comprising modern day Egypt, modern day Syria, and much of modern day Saudi Arabia) in 1517. With control over the holy cities of Medina and Mecca, the Ottomans assumed the role of leaders of the Muslim world.

The Ottoman Caliphate held sway for almost 500 years until defeated in World War I. Their territory was partitioned by Britain and France, leading to the creation of the modern Middle East and the Republic of Turkey.

The partitioning of the Ottoman Empire led to the creation of states where none had existed before. For example, Iraq was created from three unrelated provinces.

The process also dispossessed many people of a national home, most notably the Kurds, who found themselves split between south eastern Turkey, north western Syria, and northern Iraq, and north western Iran.

Since that day, Kurds have waged ongoing battles in pursuit of a land they hope to call their own. Their fortunes have been mixed with world powers alternating between favouring them and abandoning them as they provided a useful bulwark between Turkey, Syria, and Iraq.

There are mixed reports to Ibrahim’s early years; some describing him as religious scholar, others as a mediocre student who had to retake his high school.

Nevertheless, what is true is that he was captured by US forces in Iraq and detained at the Abu Ghraib and Camp Bucca detention center.

Upon his release, Ibrahim and his fellow detainees became the founders of the Iraqi division of Al Qaeda (which referred to themselves as the Islamic State of Iraq or ISI).

Abū Bakr al-Baghdadi, as Ibrahim became known, was confirmed as leader of ISI in May 2010.

With ISI expanding their territory into the Levant (Syria) came a massive displacement of refugees fleeing into neighbouring states and across the Mediterranean.

Al-Baghdadi established his capital in Raqqa, Syria. He proceeded to declare himself leader of the 5th caliphate with himself as caliph, to be known as Caliph Ibrahim.

No doubt Syria would have fallen to Al-Baghdadi’s forces had not Russia entered the fray at the request of Syrian president Assad. A US-led coalition of forces proceeded to bomb Raqqa forcing al-Baghdadi to flee to Mosul in 2014.

Last week, on 26 October 2019, US forces conducted a raid through air space controlled by Russia and Turkey into the rebel-held Idlib province of Syria on the border with Turkey

While being hunted by an American special forces team with a dog unit, al-Baghdadi was cornered in a tunnel. He died by detonating his suicide vest. Three young children, believed to be his own, died with him.

It’s an extraordinary achievement for US president Donald Trump who had persuaded Russia and Turkey to allow helicopters, jets and drones through airspace controlled by those countries. Trump publically thanked Russia, Turkey, Syria, Iraq, and the Syrian Kurdish forces for their support.

The death of al-Baghdadi does not mean the end of ISIS. It is however the mean that there is a real possibility for peace to return to the war torn areas once controlled by his forces.

The Turks have achieved their objective, to establish a buffer zone between themselves and the Kurds. Trump has achieved his objective, to get US forces out of the conflict and to take out al-Baghdadi.

What remains now is for Assad to show leadership. He should give the Kurds control of sufficient Syrian territory to establish a safe haven. And they can continue to play the role for him that they have always done – be a bulwark against external forces.

As for the future of the caliphate, I have every sense that Turkish president Recep Tayyip Erdogan has ambitions to establish a new Ottoman empire. Watch him closely. 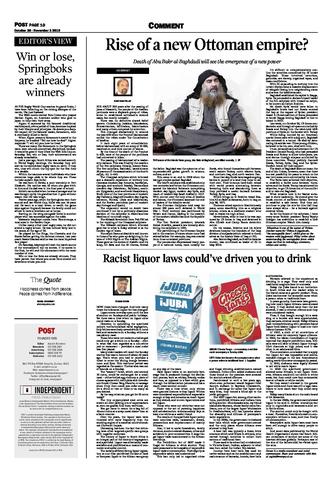