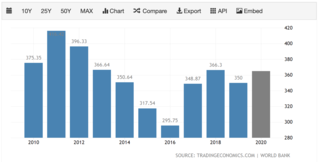 As pictures roll in from around the country of our urban masses crammed into peri-urban slums (which we sanctimoniously refer to as informal settlements), many of us have taken to sharing sentiments about how privileged we are to be relatively safe within our middle-class and upper-class dwellings.

Privileged? No. At best, we are lucky.

In 2008, South Africa under 3M (President Thabo Mbeki, Finance Minister Trevor Manuel, and Reserve Bank Governor Tito Mboweni) weathered the global financial crisis and rebounded spectacularly. By FY 2011, our GDP had clocked US $416,9 billion and our GDP growth rate was 3.284%.

And then Jacob Zuma happened. Plunder of the public purse on an unprecedented scale took place over the next 8 years.

So now we have the scenario where the GDP of our country measured at the official exchange rate is less than that of 2011.

That US $170 billion difference would have translated to R3 trillion more in our economy at today's rand value; enough to have yanked all of those people out of poverty and still pay the economic impact of Covid-19.

Forget privilege. This is the ANC's fault. By all means, care for those who are less fortunate; but do so out of kindness, not out of guilt.