The Search for Extraterrestrial Intelligence at Home is over, for now 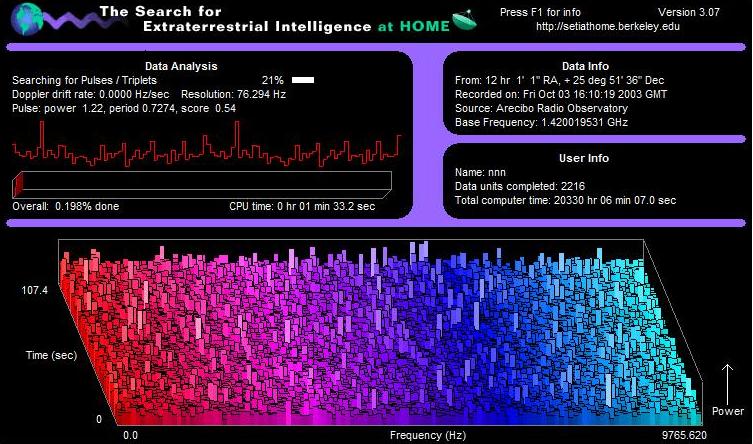 Some 21 years ago, when I was managing editor of the Cape Times, I had acquired as my desktop computer at work an Apple Power Macintosh G3 with its matching Sony Trinitron monitor.

It was both beauty and beast by the standards of the day; blue and white polycarbonate clocking in at 300 MHz. More importantly, it could effortlessly play the Star Wars Phantom Menace trailer which was the first movie trailer to debut on the Internet.

At around the same time, the University of California – Berkeley launched a public participation programme called SETI@Home – Search for Extra Terrestrial Intelligence.

The Arecibo radio telescope in Puerto Rico was constructed in the early 1960s and commissioned in 1963. From that time to July 2016, it was the world's largest single-aperture telescope spanning 305 metres. Arecibo focused on radio astronomy, atmospheric science, and radar astronomy.

The SETI@Home project was based on the idea that the data collected by this telescope could be analysed for signs of intelligent life.

Think of yourself standing next to the thunder of Victoria Falls and having a conversation with someone nearby. In theory, one could record the thunder, and by using digital signal processing, one could filter out the noise made by the falling water and hear the conversation.

Radio telescopes work like optical telescopes, but measure radio waves rather than visible light. A star might be too distant to be detected by sight, but radio waves can show us distant stars, galaxies, black holes, and other astronomical objects. To turn those radio waves into a visible image, one would need to record the radio data, process it by computer, and assign colours to different frequencies.

But what if, amid the background noise collected by the telescope, there were other signals that could only be generated by intelligent life? Like a radio or TV broadcast?

SETI@Home took the massive amount of data from Arecibo, split this into bite size chunks, and allowed the public to tap download those chunks using their personal computers to process the radio waves for signs of intelligence.

So whenever I knocked off from work, my trusty Macintosh would run the SET@Home software and happily process these chunks of data from the other side of the world.

When I got back to the office the following morning, my screensaver would give me a summary of what had been processed overnight.

SETI@Home is shutting down this operation at the end of this month on 31 March 2020. At that stage, no more of those bite sized chunks will be sent out. The project will spend the next period analyzing all the data with a view to publishing their findings.

SETI@Home never found any intelligent life of course, but it did find hints of places that need further observation where spikes in intensity of signal are not easily explained as simple noise.

But as an example of volunteer public resources working towards common good, SETI@Home was a huge success.

The original projections hoped for, at best, 100 000 computers. To date, there have been more than 5 million participants worldwide, contributing two million years of aggregated computer time and performing 10 000 000 000 000 000 000 000 floating point operations. (That's 1021.) The 2008 Guinness World Records flagged this as the largest computation in history.

For my part, it was fun being there at the beginning, and now again, at the end.