Finding ways to relate to each other more graciously

‘If liberty means anything at all, it means the right to tell people what they do not want to hear.’ George Orwell said this in his original preface to Animal Farm published in 1953.

It’s an appropriate choice of words for Judge Mahomed Solomon Navsa to quote at the beginning of a landmark 48 page judgement handed down by the Supreme Court of Appeal in Bloemfontein this past week.

But first, let me digress. For me, this story begins in early 1983 when I was a B.Sc student at Wits University. I was paying my way through tertiary education by working as a freelance journalist, primarily for this newspaper.

Filing my copy from Johannesburg to Durban meant going to the Star building at 47 Sauer Street. An operator would retype my words into a ticker tape machine. This tape was fed into a telex machine and the words would miraculously appear on a teleprinter at the Daily News building at 85 Field Street in Durban.

Going into the Star building was a less than pleasant experience. The place still had segregated canteens for black and white staff. The Editor and the News Editor both made it clear that I was reluctantly allowed into their space at the request of a sister paper in Durban. I was steered toward the black section of the newsroom where the reporters who worked on the Star “Africa Edition” were sequestered.

One of those reporters noticed my discomfort. He invited me to share his desk and offered me a cigarette. He introduced me to his colleagues.

Over the next several months, I would camp out once a week at the desk of Jon Qwelane. We butted heads regularly over his deep seated religious beliefs. (He was raised as a Roman Catholic and was convinced of the infallibility of the Pope and his pronouncements. I am an atheist and a firm believer in reproductive rights for women and gay rights.)

Nevertheless, I developed a deep affection for the man. He was what my Jewish friends would refer to as a “mensch”; generous to a fault, always helpful, always sharing his knowledge and experience with youngsters such as myself.

Fast forward to 20 July 2008. Qwelane was a columnist for the Sunday Sun and on this day wrote a piece headlined: “Call me names – but gay is NOT okay”.

I’m not going to quote the article here because I find the views JQ expressed there to be quite repugnant. It was a tirade against homosexuality and how he viewed it as a threat to traditional values. He also challenged the Human Rights Commission to take him on because he refused to withdraw or apologise for his views.

The HRC instituted proceedings against Media24 and Mr Qwelane in the equality court, saying the article contravened a section of the Promotion of Equality and Prevention of Unfair Discriminaton Act (PEPUDA).

That section reads: “…, no person may publish, propagate, advocate or communicate words based on one or more of the prohibited grounds, against any person, that could reasonably be construed to demonstrate a clear intention to – (a) be hurtful; (b) be harmful or to incite harm; (c) promote or propagate hatred.”

Judge Stanley Moshidi ruled in support of the Human Rights Commission. Qwelane’s statements, he ruled, were “declared to be hurtful; harmful, incite harm and propagate hatred; and amount to hate speech…” Qwelane was ordered to make an unconditional written apology.

Qwelane appealed the judgement on the grounds that he believed the section of PEPUDA used against him to be unconstitutional. On 19 August 2019, more than ten years after the original column was published, a full bench of the Supreme Court comprising judges Navsa, Wallis, Dambuza, Van der Merwe, and Dolamo heard the appeal.

On 29 November, the court ruled in favour of Jonathan Dubula Qwelane. Section 10 of PEPUDA is inconsistent with our country’s Constitution and is therefore unconstitutional and invalid.

There has been much criticism of the ruling in the short time following. I don’t share that view. To my mind, This ruling is a deeply philosophical argument around how to balance competing human rights without abrogating either.

Judge Navsa tries to address the question of what can be defined by law as being “hurtful”. He quotes various dictionary definitions of “hurtful” and points out:

“The common feature of all these definitions is that they are concerned with a person’s subjective emotions and feelings in response to the actions of a third party. This does not equate with causing harm or incitement to harm.

“…Professor Nel considered repeated pronouncements by churches, that homosexuality is a sin, as hurtful. One could say that pronouncements by agnostics and atheists, that the clergy and people of faith believe in fairy tales and could rightly be condemned for being irrational and that they have no place in an evolved society, would be equally hurtful to those targeted.

“…Daily human interaction produces a multitude of instances where hurtful words are uttered and thus, to prohibit words that have that effect, is going too far.

“I accept unreservedly that harm … need not necessarily be physical harm, but can be related to psychological impact. However, the impact has to be more than just hurtful in the dictionary sense.

“I am not unmindful of the threat to life, limb and psyche that members of the LGBTI community face. I will take care in crafting a remedy to ensure that they are not left without recourse.”

And this, to my mind, is the essence of good law in seeking to protect fundamental rights while protecting individuals from the adverse effects of others exercising those rights.

And what of my friend, Jon Qwelane, who hurt me deeply with his vitriol but for whom I still hold a deep and abiding affection? The ruling holds the answer to that too. I quote:

“We were informed by counsel on Mr Qwelane’s behalf that he was ailing. He had iconic status and fought hard against the divisions of the past. He might well want to consider that it is worth preserving that legacy by seeking rapprochement, even now. I urge him to do so.

“We have to, in our beloved country, find a way in which to relate to each other more graciously.” 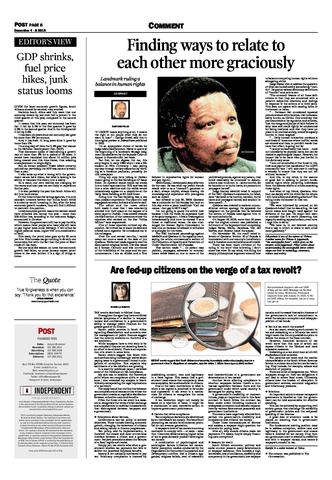