Given Eskom’s current form, let’s switch to a solar/battery option

Almost exactly five years ago, an internationally renowned electrical engineer of my acquaintance and I were discussing the Grand Inga Project – a plan to build a 40 000 megawatt hydroelectric plant on the Congo River in the Democratic Republic of Congo.

To put this in perspective, the biggest hydroelectric plant in the world is China’s Three Gorges Dam on the Yangtze River which generates 22 500 MW.

In other words, the Grand Inga Project, if completed, could supply almost 100 percent of that amount.

South Africa had signed a treaty with the DRC related to the project in 2013 which indicated we (through Eskom) would buy 2 500 megawatts of power from the plant to feed into our national grid. That treaty committed South Africa to an investment of US $2 billion for construction of phase 1 of the Grand Inga Project.

One small problem though: the Congo River is 3 500 kilometres away. Power lines from the DRC to South Africa would need to pass through Angola, Namibia, and Botswana before reaching Gauteng. Over such distances, every 160 km loses around 1% of power.

The engineer (whom I’ll refer to as Tony) was intrigued at the challenge of moving electricity from the DRC to South Africa. So he conceptualized a solution that would use high voltage direct current instead of AC.

This would have two advantages. First, DC is more efficient than AC over long distances. Second, DC uses one cable for every two needed by AC.

Tony’s interest in the project was driven by his desire to have South Africa be the first in the world to pull off a DC project of this scale.

My interest came from sheer scale of the cost saving if Tony was right. A single cable stretching from DRC to South Africa would use 2 175 kg of cable costing US $250 000 per kilometre. So each cable run would weigh 7 612 tons and cost $870 million.

I knew of one company that is part of a world leading alliance in transmission and distribution of electricity — Edison Power, which was started with R500 and a borrowed bakkie more than 35 years ago.

I had not met chairman Vivian Reddy previously, but he responded quite positively to my request for a meeting between his technical team and Tony.

The first meeting took place shortly afterward. Vivian introduced his team and left. I stayed to listen out of curiosity and watched as equations and explanatory notes flew across the whiteboard.

I took two insights from that meeting. First, the science of managing power distribution at scale was entirely new territory for me, and I thoroughly enjoyed that brief glimpse into the field. Second, I was impressed at the competence and expertise on the part of Edison’s in-house team.

I’ve no doubt that had the collective intellect in that room been given the green light at that time, we in South Africa might today have been receiving the first supply of electricity from the power of the mighty Congo River.

Instead, political instability in the DRC led to the World Bank withdrawing funding for the project in 2016. The European Investment Bank, which had initially considered an investment of almost $1 billion, has also backtracked.

The opportunity has been lost, and perhaps forever. An investment of $100 billion five years ago would have made financial sense at the time as cheap clean electricity would now be paying dividends in increased economic growth.

But technology does not stand still. Two years ago, Elon Musk’s Tesla group delivered a 100MW Powerpack giant battery to Southern Australia at a cost of $96 million.

That Australian investment led to the ability to more effectively utilize both solar and wind electricity as well as stabilizing the grid in peak demand times. In its first year of operation, the big battery generated revenue of almost $20 million.

In July this year, Tesla announced that their replacement for the Powerpack has 60% greater capacity. Tesla now says it can deploy a gigawatt-hour plant on 1,25 hectares of land in under 3 months.

So let me make a controversial suggestion: it’s time for drastic action around Eskom, and that requires writing off its debt.

Here’s my logic. Eskom currently sells electricity at a loss. Constant bailouts will not fix the problem, but the loans taken out to pay for construction of Medupi and Khusile still need to be paid off.

If we absorb that debt into the national budget, we as taxpayers will still need to cough up that money. But writing off the debt would allow Eskom to reset its tariff structure to a level that is less expensive, which in turn can spur economic growth.

Then starting immediately thereafter, Eskom will need to systematically introduce solar/battery replacements for the 13 coal fired stations it operates.

It will pay for these in two ways: One, by saving money it used to spend money on coal; two, by avoiding paying carbon tax which comes into effect in 2023 at a cost of R11,5 billion per year.

Also, we can remind Finance Minister Tito Mboweni that he has saved $2 billion that we promised to the DRC. 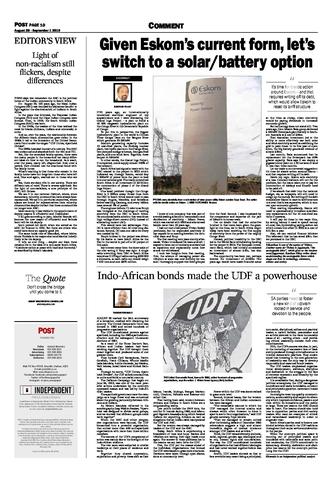