Google, Huawei, and the Trump factor

On 19 May, news broke that Alphabet Inc, owners of Google, had suspended business with Chinese telecommunications giant Huawei.

The ban extended to all of Google’s hardware, software and technical services except those publicly available via open source licensing.

The announcement did not have much impact until people began to realise that this included the Android operating system and the Google Play Store . This triggered a substantial amount of outrage, mainly directed at Google.

After Samsung, Huawei is the world’s biggest manufacturer of cellphones by volume. Hundreds of millions of Huawei phone users around the world will probably soon be wondering what to do next when they cannot run Google apps like Maps or Gmail, or get security updates.

Before we get into what’s going on, let’s make the specific point that this was not Google’s decision.

On 16 May, the Trump administration added Huawei-affiliated companies to the Commerce Department’s “Entity List”. Any company on this list is restricted from doing business with any US company without explicit US government approval. Google has no choice but to comply.

I expect every major US tech company who sells to Huawei, including Intel, Qualcomm, ARM will make similar announcements within days once their lawyers have worked out the legalities of cancelling such contracts.

A lot of the ensuing media commentary has fallen into two broad categories: Item One, “Trump is an idiot”, Item Two “US Tech giants are picking on the Chinese”.

Let’s start with Item Two. What most commentators fail to mention is the fact that Google is excluded from the world’s biggest economic ecosystem – the China market.

The entire Internet in mainland China is subject to Beijing's control – for those of us who play in the technology space, we refer to it as "The Great Firewall of China".

So a lot of the Google ecosystem which I use every day – search, Gmail, Google Drive, Google Docs, Google Maps – is not available in mainland China. Want to use YouTube, Twitter, Facebook, WhatsApp, or Wikipedia? Those are also illegal, and access to them is blocked.

So to play in the China internet ecosystem, one is forced to use their tools; Tencent Video (instead of YouTube), Weibo (instead of Twitter), Qzone (instead of Facebook), WeChat (instead of WhatsApp) and so on. Huawei’s own phones in China use their own homegrown operating system.

Naturally, these tools are owned by Chinese companies, and few would argue against the benefit this brings to China’s economy. But crucially, all these platforms have built in surveillance feeding information back to the Chinese government.

As part of this “Golden Shield project” as Beijing refers to it, Artificial Intelligence automatically filters and censors suspicious content, such as politically sensitive language or calls to protest.

My blunt assessment of this scenario is that for the longest time now, Beijing has treated Silicon Valley as their bitch.

Chinese tech companies, of which Huawei is the foremost, reap huge profit from licenced US technology in the rest of the world, but deny Google, Facebook, Twitter such access to their own market in China.

Apple reached a Faustian pact with Beijing to get access to that market. Apple's laudable privacy standards are non-existent in mainland China in order to comply with the regime's surveillance requirements which insist that Apple’s iCloud data – including the encryption keys to such data – are stored on Chinese data servers.

No doubt, this situation would have continued unchecked, because no sensible business turns away revenue in one territory because of unfair practice in another. Donald Trump drove a truck through that reasoning. Blacklisting Huawei is going to impact the bottom line of Google, Facebook and so on, and there’s nothing those companies can do about this.

So this brings us back to Item One, or why I don’t believe Donald Trump is an idiot.

Trump has cited security concerns as the main reason for acting against Huawei.

Huawei is currently the world leader in 5G technology which brings gigabit speeds to mobile networks. As far as I have observed, most telcos around the world rolling out 5G networks (including South Africa’s RAIN) have been building using Huawei infrastructure.

There are many who say that Trump is trying to give an unfair advantage to the US tech companies who are currently playing catch up with Huawei. There might be some truth to this.

(If you think I’m paranoid, remember that China built the African Union headquarters in Addis Ababa as a “gift” to us Africans, and then built spyware into the computer networks to ship confidential information to Shanghai every night.)

That’s a lot of information I’ve given you to digest, so let me close off with the most crucial piece of this puzzle: the trade war.

The US/China monthly trade deficit has consistently averaged more that US $35 billion per month. In January, Trump imposed tariffs of 25% on many Chinese imports. The Chinese responded by doing the same with US imports. Almost everyone thinks this is a bad idea.

But consider this: if a 25% tax on trade (which is what a tariff is) is now the norm, this means that the US government is benefitting from 25% of the trade deficit as new revenue. This translates to about $80 billion per year (which can subsidise a lot of industries such as soybean producers who are being hit by China’s tariffs).

Winners in this war in the short term will be high-skill low-wage countries like India and Vietnam who stand poised to become new labour-intensive manufacturing hubs for US tech companies.

Personally, I believe with advances in robotics we see in assembly line technology, many of those jobs in China are going to move back to the US – which is what Trump wants. 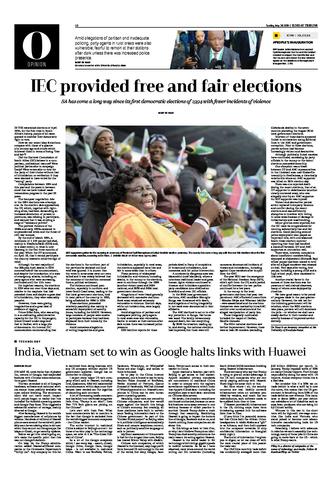