There’s a virtual ring that runs around Vienna’s inner city reflecting where the Austrian empire’s rulers once held sway and where Hitler arrived to a tumultuous welcome from some 250 000 Austrians about 70 years ago. In relative terms, that was almost yesterday. Today, there is an art exhibition in the city called Restitution reflecting works stolen from Jews — many of the original owners now untraceable.

I suppose it’s a very different city now. There are many Africans and Turks and Serbs and Croats in the subways and shopping centres; with kebab and falafel outlets far more ubiquitous than McDonald’s. I find these things reassuring — call it the healthy paranoia of a non-European in Aryan territory. At my hotel, (the Mozart, across the road from the Wolfgang Pauli Institute of the University of Vienna who are my hosts), there is a fabulous sushi restaurant populated by a melting pot of student and academic types.

Back in my hotel room, I am suddenly reminded of a conversation I had in Sardinia 15 years before with my then landlord who told me that he had difficulty renting out the beachfront villa (which was to be my home for a while) because he did not rent to Germans.

“Because they put bricks in the toilet!”

I dismissed this at the time as paranoid ramblings of an insular island dweller until a few days later when I recounted this tale to one of my research assistants — who told me: “Yes, it’s true. They put bricks in the toilet!” His family too had a beachfront villa which they had rented to Germans, and had found a brick in the toilet — in the bowl.

It was around three years later when I visited Berlin that I found a clue. The toilet bowls had this truly bizarre shape — where one would expect excrement to drop into water masking the odour, German loos had a flat sill. Now with my boy scout background, I’m quite used to taking a dump in shallow excavations. But finding oneself inches away from the stuff in the home of Vorsprung durch Technik is quite disconcerting.

“Hitler told his people that they should examine their stools to make sure that they were healthy. So the toilets were designed so that people could take a good look before flushing. It’s mainly the older generation and people from the East who still do this.”

“Oh, some of them put bricks in the toilet.”

I was in Tübingen near Stuttgart two days ago. My friend there has a new apartment — eco-efficient with modern insulating materials and a heat exchange system which warms incoming air with the heat of outgoing air; and a familiar toilet bowl which would be equally at home in the US or South Africa.

But at the Hotel Mozart, some things have not changed. And so, for your edification and delight, I present the Hitler toilet bowl, with a wad of sodden toilet paper to demonstrate its usage. 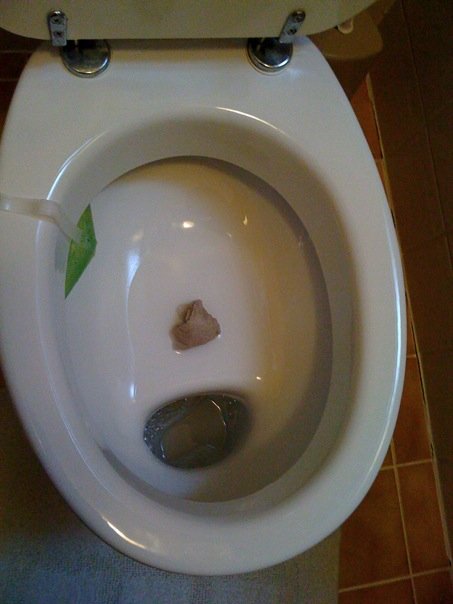 Happy New Year. May it be one in which we are grateful for small mercies.