Live long... In our memory

Leonard Nimoy, who played the iconic half-human half-alien first officer of the starship Enterprise, passed away a week ago. Kanthan Pillay reflects on the lasting impact of Star Trek.

The year 1966 was a tumultuous period in the history of the United States of America; and, as a result, for much of the world too. The US had recently begun deploying combat forces in Vietnam. The first SR-71 Blackbird spy plane took to the skies. Fidel Castro declared martial law in Cuba. The civil rights movement under Dr Martin Luther King spread north; sparking race riots in Cleveland, Ohio, in Chicago, Illinois, and in Lansing, Michigan. Tens of thousands of anti-war demonstrators gathered outside the White House and the Washington Monument.

Against this backdrop, the debut of the television series Star Trek on 8 September was literally anachronistic. Set roughly 300 years in the future in the 2260s, the series documented the adventures of the crew of USS Enterpriseled by Captain James T. Kirk (William Shatner), first officer and science officer Spock (Leonard Nimoy), and chief medical officer Leonard McCoy (DeForest Kelley).

Although equipped with a formidable level of weaponry, their mission was one of peace as Captain Kirk would recount over the opening credits:

"Space: the final frontier. These are the voyages of the starship Enterprise. Its five-year mission: to explore strange new worlds, to seek out new life and new civilizations, to boldly go where no man has gone before."

It's unsurprising that a science fiction series focussing on space travel was created at that time. Smarting from the fact that the communist USSR had taken lead in the race to manned spaceflight, President John F Kennedy had made it a point of national pride that the US should become the first country to put a man on the moon. Just three weeks before Star Trek's debut, Lunar Orbiter 1 successfully reached the moon, sending back the first picture of our planet taken from another world.

What was surprising was that Star Trek managed to ride rough-shod over many of the social issues of the period: the cold war, American nationalism, sexism, racism, and religious fervour.. An anti-war humanist agenda dominated the storytelling. The cast reflected a universe where race or nationality did not matter.

Communications officer Nyota Uhura, effectively fourth in command of the Enterprise, was played by Nichelle Nichols — a black woman. It was a first for television in the US in that it was unheard of for black and white characters to be portrayed as social equals on the small screen.

"It didn't hit me at the time until somebody told me," Nichols told The Huffington Post in 2012. "I splashed onto the TV screen at a propitious historical moment. Black people were marching all over the South. Dr. King was leading people to freedom, and here I was, in the 23rd century, fourth in command of the Enterprise."

Although treated as an equal by her fellow cast members, Nichols still had to grapple with the underlying racism of the studios at the time, such as separate entrances for black and white actors. She says: "Oh, man, there were parts of the South that wouldn't show 'Star Trek' because this was an African American woman in a powerful position, and she wasn't a maid or tap dancer."

As a result, she had considered leaving Star Trek at the time, but was persuaded to not do so by Dr King. In her words, "He said, 'Don't you realize how important your presence, your character is? This is not a black role or a female role. You have the first non-stereotypical role on television. You have broken ground. You're an image for us. We look on that screen and we know where we're going.' It was like he was saying, 'Free at last, free at last!'"

The helmsman, Lieutenant Hikaru Sulu (George Takei), is of Japanese heritage. Again, his was one of the first portrayals of Asian actors in a positive role. A Star Trek producer described the role as "the antithesis of the so-called expressionless-unemotional-inscrutable Asian".

The Russians, too, were portrayed in a positive light. The character bio of Ensign Pavel Andreievich Chekov (Walter Koenig) was that of "an extraordinarily capable young man -- almost Spock's equal in some areas. An honour graduate of the Space Academy."

We can reflect now on how many of the depictions of future technology portrayed in Star Trek are now part of our everyday existence. Our smartphones now encapsulate the functionality of the Star Trek communicators and tricorders. Touch screen computer technology, universal translators, personal navigation devices (adversely affected by magnetic storms), 3D printers, CAT scans, biometric access control; all of these debuted during the TV series.

All of these played second fiddle to the social impact of Star Trek.

The first interracial kiss on television happened in the third and final season of the show. Under the telekinetic control of an alien species, Kirk and Uhuru are "forced" to kiss. NBC executives were reluctant to screen the shot and asked for alternate takes. Shatner and Nichols deliberately flubbed the alternate takes, so the kiss stayed.

Nichols says she was surprised that the flood of mail the show received after the episode was aired was all positive. A letter from a Southern viewer said: "I am totally opposed to the mixing of the races. However, any time a red-blooded American boy like Captain Kirk gets a beautiful dame in his arms that looks like Uhura, he ain't gonna fight it."

But the defining character was undoubtedly that of Spock (Leonard Nimoy). Born of a human mother with an alien father from the fictitious planet Vulcan, Spock has green blood (from a copper base), distinctive pointed ears, and is mildly telepathic when in physical contact with others.

The conflict between his cold calculating Vulcan heritage and his human emotions became a conduit for many of the humanist lessons woven by the show creators into the script.

His trademark Vulcan salute (an open palm with fingers extended in the shape of a "V") along with a greeting which was more like a benediction ("Live long and prosper") has over the past almost 50 years become a rallying point for thousands of Trekkers who long for the very achievable universe created by Gene Roddenberry.

Leonard Nimoy is no more.

He is not the first of the original cast to pass away, but through his appearances in two recent Star Trek movies as an aging version of himself who has travelled by in time to meet his younger self, he provided a bridge between generations.

The world is a poorer place without him in it.

Nimoy himself summarised it perfectly in his final message on Twitter1 at 9h36 on 23 February:

A life is like a garden. Perfect moments can be had, but not preserved, except in memory. LLAP 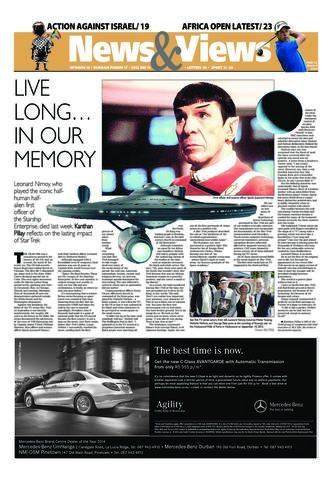