My front row seat to history...

Around the time of my 19th birthday in September 1980, I found myself recently kicked out of the University of Durban-Westville in the aftermath of student protests and trying to work out what to do with the rest of the year. My mother had let slip at one point that the news editor at Post was a former pupil of hers. I asked her to take me along to meet him.

The offices on the 5th floor of the Daily News Building at 85 Field Street were filled with desks and typewriters. (Computers had not yet been introduced.) A haze of cigarette smoke hung over the office. And sitting in the corner, at that stage still mostly clean-shaven, was a burly guy with a piercing glare who quickly stubbed out his cigarette and pushed his ashtray away at the sight of my mother. "Ma'am," he said with a bit of a bow and flourish as he stood up to greet her. He then looked at me suspiciously. "What are you looking at?" he said.

"You remind me of Peter Ustinov," I replied.

Clearly disarmed and chuffed at the same time, he gave a broad smile and indicated that I was now worthy of sitting down.

It was my introduction to Farook Khan; to this day, one of the most engaging and entertaining figures the world of journalism has produced. Farook had taken it upon himself to take a group of youngsters under his wing to teach them the basics of journalism. They were Ismail Suder, Jameela Hoosen, and Rashida Dhooma. I was now going to become the fourth.

The period that followed between 1980 and my departure from the country (and Post) during the State of Emergency in 1986 was, in hindsight, a front row seat to history in the making. Here are some of my personal highlights.

I have had a truly remarkable career since my days at Post; none of which would have been possible without the lessons I learnt from Farook Khan; for which I am forever grateful. 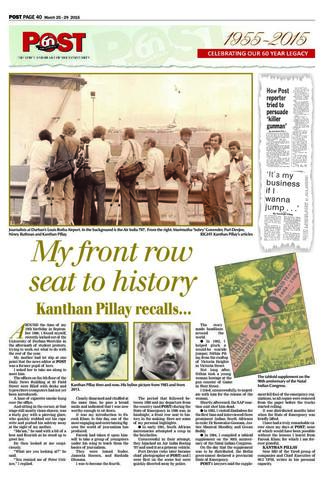