In pursuit of win-win

Stop me if you’ve heard this one before. A guy flies from Johannesburg to Hong Kong to get his suits bespoke tailored there because he’s crunched the numbers and has worked out that it would actually be significantly cheaper to do so than buying from the Hugo Boss store in Sandton City.

So he stops by to pick up the finished product and is impressed by the impeccable sartorial elegance. He tries to strike a pose in front of the full-length mirror, and his hands instead slip down the sides of his trousers. He turns to the tailor bewildered.

“Where are the pockets?” he asks.

A flurry of Cantonese follows between the tailor and his assistant. The assistant finally asks, “Sir, did you not say you were a banker?”

“Begging your pardon, sir. We’ve never encountered a banker who had his hands in his own pockets.” 1

Don’t get me wrong. I have no problem with bankers. My portfolio includes two JSE-listed banking shares, and I’ve been quite delighted with their performance. I’m also privileged enough to be in that category where my banking charges are almost non-existent. Win-win.

Not so in the case of my occasional domestic worker (whom I inherited from a friend of mine who quit his job as an economist at Eskom and emigrated to Canada around the time of my moving back to Johannesburg in 2004, but that’s a story for another day).

(Now I know the idea that Eskom once had economists on its payroll has left you disconcerted. Please stay focussed.)

Said domestic worker is a Zimbabwean. She lives in Tembisa, north-east of Sandton behind Grand Central Airport. And up until last month, she was one of our unbanked. In effect, she was a victim of FICA.

Our Financial Intelligence Centre Act (38 of 2001), which came into effect mid-2003, has the objective of fighting financial crime, such as money laundering, tax evasion, and terrorist financing activities. This is quite noble, I suppose. Every so many years, my bank gives me a call and I provide a copy of my Eskom bill (which ostensibly proves that I live where I say I live), and my banking services continue uninterrupted.

Not so in the case of my occasional employee (whom for the sake of this conversation I will call Grace). Grace has a work permit in her passport from our department of Home Affairs, but has no utility bill and no lease agreement.

The consequence for her (and millions of other Zimbabweans working in South Africa) is that their lives revolve around cash. It means that her wages (from me and her other employers) either gets carried about on her person or stashed under her mattress. She has been mugged a few times over the period she has worked for me, and has had her home broken into as well. Access to a bank account would have created a margin of safety, but FICA rules make that well nigh impossible.

I believe this needs to change.

I doubt Grace earns more than R6000 per month between me and her other employers. It’s a non-existent amount from a money-launderer’s viewpoint, but is her entire universe.

Surely the time has come to amend FICA so that the rules of identification only kick in when a threshold of suspicion is breached? This can be as low as R10 000 per month.

The knock-on effects of having such workers – legal and illegal – within the system are huge. It cuts down on crime. It allows access to cashless payments and the internet economy. It allows money to circulate. (A million Zimbabweans with R2000 apiece in the bank is R2 billion that bankers then don’t need to borrow from the Reserve Bank.)

Grace, meanwhile, now has a bank account. A South African benefactor agreed to provide proof of residence that she lives at their home. Win-win. 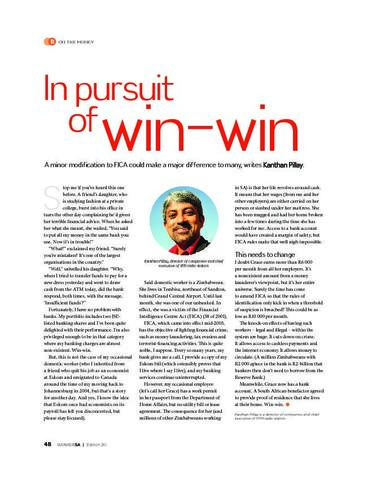