The world’s 400 richest people collectively lost $127 billion on Friday when it became clear that a majority of UK voters had opted to leave the European Union.

That figure from the Bloomberg Billionaire Index is equivalent to almost half of South Africa’s GDP — wiped out in a day.

I chose to highlight that figure because there has been a narrative carving itself out in media commentary since the vote in favour of Brexit became known – that Brexit was pushed by the moneyed class as a means of consolidating their wealth base to the exclusion of the poor and downtrodden.

Also, commentators who predicted disaster in the event of Brexit are now doing their damnedest to tell everyone: “See? We were right! It’s a disaster.”

I’ll explain why I believe so shortly, but first, some perspective.

If we track the rand/dollar exchange rate over the past 7 days, we opened the week trading at around R15,15 to the dollar. Over the course of the week, the rand gradually strengthened against the dollar, reaching R14,33.

Then Brexit happened. Within an hour or so of the markets opening, the rand dropped drastically against the dollar breaching the R15,20 mark. Commentators began chorusing: “See? We were right! It’s a disaster.”

But by midday, this had turned around. The rand once again risen past the R15 mark touching R14,91 before settling at around R15,07 where it has held steady since.

Almost every currency in the world has followed a similar pattern over the past week.

Essentially, almost everyone had bought into the media hype that Britons were going to vote to remain in the European Union. This led to a sense of optimism that saw almost all currencies strengthening against the dollar.

So now that the dust has settled and the world has not ended, what are the economic consequences for the UK?

In February this year, Woodford Investment Management commissioned a report from Capital Economics on the potential impact of Brexit. It’s 34 pages long, so let’s look at the essence.

Estimates of the short term economic impact from the London School of Economics show negative growth range from -2,2% to -9,5%. But this needs to be measured against the cost of membership of the EU, which is at best 1,75% of GDP and potentially as high as 10%.

Summary: It balances out.

Many people point out that only 18% of EU exports got to the UK while 50% of UK exports go to the EU. But, look at the top seven economies in the EU separately where with the exception of Germany, UK exports more than it imports. What is likely is that the UK will, like Switzerland, establish free trading relations with the EU through a series of bilateral agreements.

Summary: Trade with the EU will continue as before but with the plus side of UK having freedom to negotiate separately with third party countries.

The UK currently enjoys the benefit of providing financial services to the EU which is worth about £16bn per year. On the other hand, EU regulations currently prevent UK financial institutions from negotiating bilateral deals with other countries.

Summary: Leaving the EU means the UK financial institutions will scale back on Europe but frees them to strike good deals with China and Hong Kong and emerging markets in the long term.

OECD figures show British productivity to be below Italy, Germany, France, and the United States. Brexit supporters blame this on EU regulation, which currently costs the UK around £33bn per year. In fact, the cause is a decline in industry post 2008 while the service economy has grown.

Summary: Reduced regulation might help productivity slightly, but not by much.

Many investors use the UK as a gateway to Europe. Brexit opponents say this will dry up when Britain leaves the EU. But Britain has other strengths as an investment destination such as protection for minority investors, good transport connections, strong rule of law, and the English language.

Summary: FDI is unlikely to be significantly affected.

By value, roughly half of transactions in the commercial property market post-2012 have been from overseas buyers. If this demand drops following Brexit, property values will drop particularly in London; knocking 8% to 15% off capital values.

Summary: Likely to be downsides, but UK property prices significantly outpace the rest of the EU historically. This is unlikely to change.

So if the facts show that there is little overall economic impact, either positive or negative, why then did the UK voters feel so strongly about this issue?

The short answer for me is immigration. Membership of the EU comes with unrestricted labour mobility, and annual net migration from the rest of the EU to the UK has more than doubled since 2012.

Why do people flock to the UK? For the same reason that Mexicans flock to the US and Zimbabweans flock to South Africa – there are jobs available which are relatively unskilled, and the migrants are willing to work for less than the locals. This is great for the economy overall but terrible for social cohesion.

The UK economy will continue to be dependent on migrants, but once outside the EU, expect their policy to be more nuanced along the lines of Canada or Australia which favour skilled workers. It will also allow the UK to look outside the EU for migrants. We could well see a return to the days of South African youth given access to short term work visas. 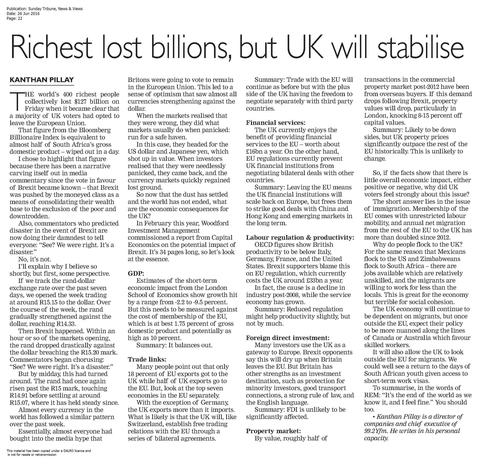