Stop assuming there is a hidden agenda

Special Investigating Unit head Vasantrai Soni SC announced in January that he would step down. He had served 18 months.

He cited personal reasons: his wife was ill and he had to make a choice between being a corruption-buster or a husband.

The fallout was immediate.

Corruption Watch head David Lewis said there had been so much instability in the corruption fighting institutions that news of Soni’s resignation was not a shock.

Lewis told Stephen Grootes of Eyewitness News it was hard to understand why political leaders “allow this instability” in organisations such as the SIU, the National Prosecuting Authority (NPA) and the Hawks.

MP Glynnis Breytenbach released the DA’s view: “The DA notes the resignation of SIU boss Soni. This follows reports stating he has tendered his resignation, allegedly due to ‘intensely personal reasons’. Whether or not this is the main reason remains to be seen.

“After the long-standing state capture of the NPA, and the recent politically motivated suspensions at the SA Revenue Service, the SIU appears set to be the latest victim of a politically expedient ANC in government, whose sole fixation seems to be to protect Number 1 and his deepening network of patronage.

“This is the wanton disregard for our State institutions we have come to expect from President Jacob Zuma’s government.”

Trade Union Nehawu issued a statement saying: “We believe that his resignation was long overdue and it is nothing but camouflaged surrender by a man who knew that he had lost the confidence of his employees.

“Despite his best efforts and those of his sympathisers to present him publicly as a cutting edge leader, he was an intolerant, stuffy conformist who became a polarising figure within the institution.”

The Council for the Advancement of the South African Constitution’s Lawson Naidoo said it was an unhealthy situation. “The only people who can benefit are those speaking to a broader account of corruption and wrongdoing under our law.”

Google “Vas Soni resignation” for more examples. The almost universal undercurrent to this story was that someone, somewhere was lying and Soni had been forced out.

Anitha and Vas Soni met in 1987 and they married in 1990. Vas had a long and illustrious career as a journalist, lawyer, lead investigator into corruption at prisons and acting judge.

Pause to reflect on the fact that we had in this couple two remarkable South Africans, both commanding respect from their peers and colleagues, who went through the past six months in physical and emotional pain. And the overall narrative in our media was that someone was lying.

We need to stop this.

Yes, corruption is rife. Yes, there are political machinations at play. But to trample roughshod over the feelings of a couple who have more than played their part in building our country simply because some of us believe there is a hidden agenda is inhuman.

Many in the media believe a story must be “hyped” to appeal to readers. If there is no evidence to support wrongdoing, hint at it; draw spurious correlations with unrelated incidents and suggest that somewhere, somehow, “Number 1” is behind it.

We need to stop this.

I do not expect my colleagues in the media to blindly lap up statements issued by officialdom. But can we agree that we need to be a compassionate nation before we are a distrustful one?

• Published in the Sunday Tribune 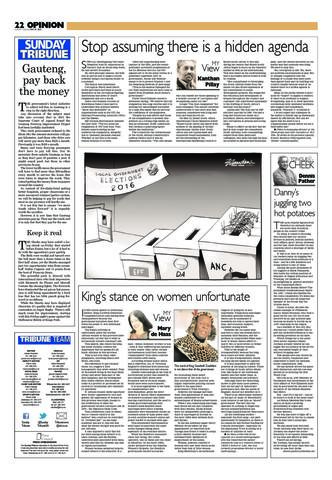