Unions declare victory, but it’s one not for the workers

So this guy was taking a smoke break with his non-smoking colleague who asks: “How long have you been smoking?”

“Thirty years! Wow! You smoke a pack a day. You’re spending R16 425 per year. Now if you invested that money at 8% return for the last 30 years, you’d have about R2 million in the bank today. You could pick up a Ferrari in good nick for that price.”

The smoker frowned. “But you don’t smoke,” he said to his colleague.

“So where’s your Ferrari?”

I mention this story because it’s difficult to start talking about numbers without putting many people to sleep. But since we’ve started talking about percentages, let me tell you another story.

At the beginning of this month of November 2019, pilots flying for South African Airways received a pay increase of 5,9%. At the same time, SAA announced its intention to shed 944 jobs to cut costs.

Now SAA pays its employees extremely well compared to public sector schoolteachers or doctors. Flight attendants earn up to R332 000 per year. A customer service agent earns up to R256 000. An aircraft mechanic or service technician earns between R130 000 to R436 000.

But unlike other SAA employees, commercial pilots are highly sought after around the world. An SAA commercial pilot could easily find employment in Singapore or Hong Kong, and earn four times as much as they do here.

So the 5,9% increase to pilots still leaves them poorly paid by global standards. Nevertheless, trade unions working with SAA were incensed. How dare SAA give the pilots an increase but not the rest of the workers?

There followed some hasty backpedalling on the part of SAA management. Workers would get the same 5,9% increase, they said, but only in April next year because there is no money available right now.

Not good enough, said the unions. They demanded an 8% increase. When this was not forthcoming, they went on strike.

Eight days later, the strike came to an end. The parties agreed to an increase of 5.9% on total cost of employment retrospective to 1 April 2019, which will be paid in the February 2020 payroll, subject to availability of funding.

SAA was quoted as saying the strike cost R50 million a day in lost revenue. The unions have declared victory.

Was it a victory for the workers?

So for the sake of our discussion today, let’s look at our flight attendant earning R332 000 per year and see how she fares before and after the strike.

If you’re confused, please bear with me. I’ll break it down:

I can understand how the workers did not see how stupid this is. The union leaders drummed up a great deal of manufactured outrage portraying the SAA employees as exploited victims.

In a way, this is now true. The workers have ended up with less money than they would have had had they accepted the SAA offer in the first place.

Variations on this drama have played themselves out in almost every strike in our country’s recent history with striking workers ending up with less money than if they had not gone on strike. The cost of such strikes to the economy has gone largely unnoticed.

But now we have a figure to focus on. R50 million a day in lost revenue to SAA translates to R400 million down the drain. The workers ended up with an effective 3,7% increase. And we taxpayers will have to fund a R2 billion guarantee to make this happen.

The time has come for workers to shift their focus to union leaders who themselves were unaffected. They continued to draw their salaries uninterrupted through the process. Perhaps if the no work no pay rule were extended to union leaders too, they might hesitate to take the country down the path of destruction. 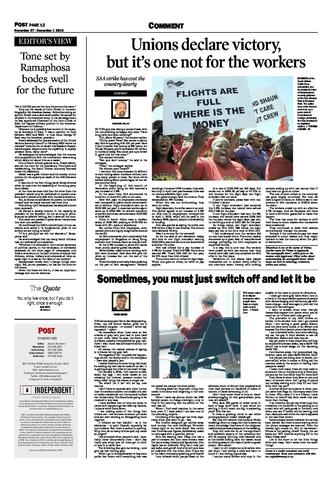