Unlikely bedfellows, the DA and EFF have much to do

In the build-up to the 2014 national elections, Advocate Dali Mpofu, representing the then newly-formed Economic Freedom Fighters, was a guest on my radio station’s weekly current affairs show. We chatted briefly in the parking lot thereafter, and I posed the question: “If you end up doing well and driving the ANC below 50 percent in some areas, would you consider going into coalition with them?”

“Never,” he said quite decisively, indicating that he thought that would be the kiss of death for the new party.

I chuckled. “So you learned a lesson from what happened to the Independent Democrats in Cape Town?”

“Yes,” he said. “We would rather consider a coalition with the DA than the ANC.”

It’s a conversation that I’ve often repeated since and have always been met with incredulity at the idea. What on earth does the EFF have in common with the Democratic Alliance?

I’ll return to that question shortly, but first, I’d like you to think back to 11 May 1994 when President Nelson Mandela announced the first cabinet of a free South Africa:

I’m not going to list all 27 members of President Mandela’s cabinet; I’m just reminding us that the idea of people with diametrically opposing viewpoints working together in the national interest is not a new one. The interim constitution gave us a government of national unity – the mother of all coalitions.

Surprisingly, it worked. The successes of the Mandela administration feeding into the Mbeki years sparked the biggest sustained period of economic growth and national prosperity in our country’s history.

Even when the 1996 constitution removed the need for a shared cabinet, President Mbeki of his own accord included members of other parties in his team.

The result was a steady build up of trust in the ANC peaking at the height of the Mbeki era with the party earning two-thirds of the seats in the National Assembly; thanks in part to the National Party disbanding and merging with the ANC.

Fast forward through the decades to this past week where our local government elections have wreaked havoc upon the mighty ANC’s once unassailable position. The party now finds itself dropping below 50 percent in Nelson Mandela Bay, Tshwane, Ekurhuleni, Mogale City, and Johannesburg.

Most of us now agree that the self-destruction of the ANC traces back to Polokwane 2007 where Jacob Zuma unseated Thabo Mbeki as president of the ANC.

The subsequent “recall” of Mbeki as president of the country sparked the first implosion. Mosiua Lekota and Mbhazima Shilowa broke away to form COPE, taking with them 1,3 million former ANC voters.

And the final straw to break the camel’s back is the current local government elections, where the EFF has racked up 2,4 million former ANC voters.

This leads me back now to my earlier question as to what the DA has in common with the EFF? How can they possibly work together?

Some 2400 years, there lived in India a man named Chanakya – teacher, philosopher, economist, jurist and royal advisor. He is credited with writing the Arthashastra. Loosely translated as “The Science of Politics”, it includes books on the nature of government, law, civil and criminal court systems, ethics, economics, markets and trade, the methods for screening ministers, diplomacy, theories on war, nature of peace, and the duties and obligations of a king.

One gem of wisdom from the work which has become part of global culture today is this simple concept: “The enemy of my enemy is my friend.”

The EFF has altered the odds in the DA’s favour. By slashing the ANC support base, it has fast tracked the current situation where the ANC and DA are neck and neck in the major metropolitan areas apart from Durban.

At the same time, the EFF is in the difficult position of having captured the support of 8% of the population without controlling a single municipality. If it is to grow into the future, it has to be seen to deliver.

The Democratic Alliance, where it governs, has shown itself to be good at two things. One: it is the least wasteful in terms of spending public funds and consistently posts relatively clean financial audits. Two: it spends a disproportionately high amount of its revenue on upgrading poorer communities.

The EFF also has these at the core of its platform. They too, want an end to wasteful expenditure. They too are focussed on upgrading poorer communities (which is where they have posted their most significant electoral gains).

And that’s why alliances between the two parties are likely to work. The EFF simply has to write into its agreements with the DA that poorer areas be prioritised, The DA will happily say yes, because they would have done that anyway. The EFF then simply needs to sit back with a watchful eye, allowing the DA to do the work, and the EFF to take the credit.

So much for the facts. Now here’s my opinion if you care to have it.

For the ANC to regain its former glory, there has to be a signal shift in the way the organisation is run. The National Working Committee of the party must be stripped of its ability to dictate to the provinces who should feature on election lists. And the party needs to allow its leaders to openly campaign for positions rather than waiting to be “deployed” by Luthuli House.

Coalition governments are good for us. They force fiscal discipline because all members of the coalition have to agree before public funds are spent. They force transparency because decisions are now argued in public rather than imposed by Luthuli House.

And most importantly, they force enemies to work together. 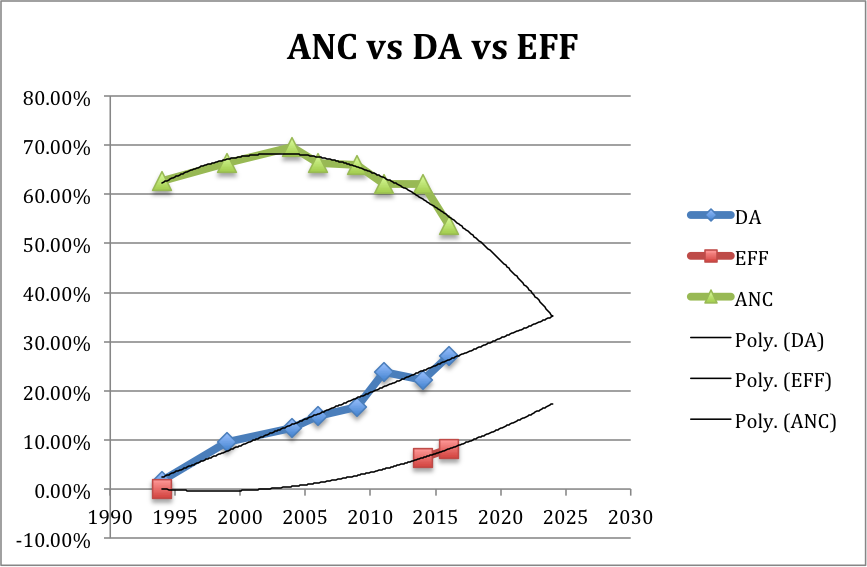 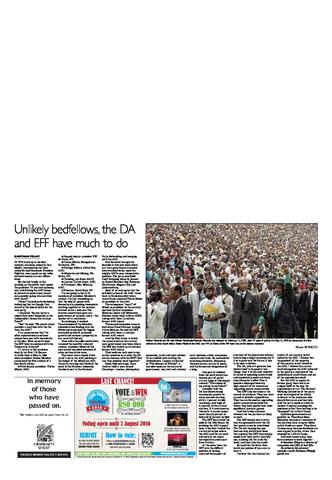