War is not as sexy as it used to be... but that might change

The 21st century introduced us to war as a television event. Starting with the millions of us around the world who watched jets slamming into the World Trade Centre’s twin towers in New York City, we stood mesmerised as those buildings came down in spectacular slow motion.

Barely a month later on 7 October 2001, the US and UK began airstrikes on Afghanistan. We saw 24 hour coverage of B-1 Lancers, B-2 Spirits, and B-52 Stratofortress bombers ponderously taking to the skies. We saw F-14 Tomcat and F/A 18 Hornet fighters along with Tomahawk cruise missiles launched from US and British aircraft carriers and submarines.

Two years, the US and UK began the Iraq War with their “Shock and Awe” bombing campaign. CNN correspondents such as Wolf Blitzer and Christiane Amanpour became instant rock stars.

No doubt, coverage of war as entertainment would have continued to grow steadily over the subsequent decades.

Hands up if you saw the last James Bond film, Spectre. Remember the destruction of Ernst Stavro Blofeld's communications centre in the middle of the Moroccan desert? That scene holds the Guinness World Record for “Largest film stunt explosion”.

The blast detonated 8 418 litres of kerosene with 33 kg of powder explosives. In old school terminology, that’s equivalent to 68 tons of TNT.

Compared to that spectacle, a distant night shot of an oil refinery on fire does not make for good television; which is one of the reasons why we are not hearing more about a potentially catastrophic conflict playing itself out right now in the Middle East.

The two plants produce 5,7 million barrels of oil per day. To put this in perspective, we in South Africa consume 621 000 barrels per day.

Houthi rebels in Yemen claimed responsibility for the attack. There is good reason to believe them. Since 2015, the Saudis, backed by the United States and UK, have been at war with the Houthis. The Saudi bombing campaign in Yemen has killed or injured more than 17 000 civilians.

The Houthis say that they used newly developed drones, some equipped with turbojet engines, for the attack. They had displayed some of these to media in July this year. They say ten of these were used in the attack on Abqaiq and Khurais.

In spite of the Houthis having claimed responsibility as well as having both the motive and capability for carrying out the attack, the US has blamed Iran.

President Donald Trump has announced deployment of US troops to Saudi Arabia. In return, the Iranians say they are “ready to destroy” any country that launches an attack on its territory.

Nearly all crude oil from the Middle East flows through the Straits of Hormuz. In the event of war, Iran would effectively shut down this waterway.

The Abqaiq oil complex is the starting point of the East West Petroline,a natural gas line, which has been converted to crude oil transport, and which bypasses the Strait of Hormuz.

But whether the attack on Abqaiq, which is Saudi Arabia’s biggest crude processing and desulphurization facility, came from Yemen or Iran, what has been demonstrated by the attack is how easily it can be done.

Iran has hundreds, if not thousands, of Unmanned Aerial Vehicles (as drones are properly known). Nearly all of these have been developed within the country. Among these is the Simorgh, a reverse-engineered copy of a Lockheed Martin RQ-170 Sentinel combat drone captured by the Iranians in 2011. It carries four precision guided bombs.

If the US were to attack Iran, that country has promised to retaliate against every country with a US presence in the region.

Qatar hosts the biggest US military base in the region and one of the biggest in the world with 10 000 US service personnel. Distance to Iran: 200km.

The United Arab Emirates hosts 5 000 US troops. Distance from Iran to Dubai: 130 km.

Oman provides airbase and port facilities to the US in 6 locations. Distance from Iran to Muscat: 130 km

Kuwait maintains a force of 2 200 US troops. Distance from Kuwait City to Iran: 150km.

In other words, should the US decide to attack Iran, it would be a very different scenario to attacking Iraq. In the long term, the US would reduce Iran to rubble, but in the process would come the total obliteration of the UAE, Oman, Qatar, Kuwait, and Bahrain along with the oil fields in Saudi Arabia.

And no Hollywood special effects team is going to be able to match that.


• In March this year, the US Senate passed a resolution to end US support of Saudi Arabia in Yemen. This was vetoed by President Donald Trump.
• Recently, Trump fired his national security adviser, John Bolton, who was known to favour military action against Iran.
Tweet 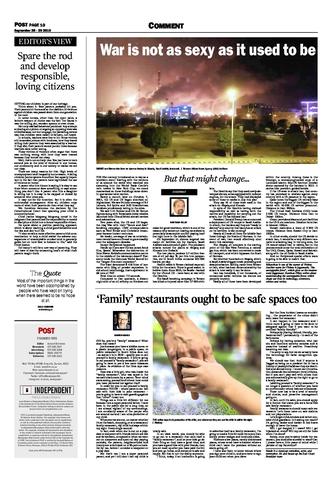