‘We have more in common than that which divides us’

There’s a final question that I have snuck into the qualifying examination for trainees in my Y Academy Radio Learnership programme over the past couple of years.

“A hostage taker has a gun to your head. In 60 seconds, he will end your life. You have one minute to live. What do you have to say to the world in the 60 seconds that are left to you?”

It’s a test of character, really. It’s an attempt to drill down to the essence of what one holds dear about one’s life. Ian Fleming, creator of James Bond, voiced this admirably when he had his hero say: “You only live twice: Once when you are born. And once when you look death in the face.”

By challenging my trainees to confront their own mortality in their minds, I am able to get a clear insight into which of them truly appreciates this ephemeral thing called life. After all, it is only by appreciating the value of something that one can cherish and nurture it to its full potential.

And the thought occurred to me as I navigated through Johannesburg traffic to the office this morning: what if this were to be my last column ever in this publication?

It was 4 May 2011 when the first installment of “View from the Top” appeared – three weeks shy of three years ago. During that time, it has appeared in the same space every week without fail; except for Christmas Day last year when Post did not publish.

There are some 345 000 readers who browse through Post every week. Of these, about 24 000 people will read these 800 words every week. What would I say to you, dear reader, if I had this one final opportunity to leave you with a message?

It is simply this: We have more in common than that which divides us.

It's a theme I have revisited over and over again in my current day job: how do we steer the national conversation along a path that draws us together?

The recent events in the Crimea, which kick-started the new Cold War, also triggered my recollection of a haunting theme from the Lieutenant Kijé Suite by Russian composer Sergei Prokofiev.

I've had the snippet playing at the back of my mind fairly consistently over the past weeks; mainly because it was used by the musician known as Sting in his 1985 song called Russians.

Sting's song was a commentary on the Cold War's underlying premise of mutually assured destruction (MAD) – which is what one may expect if the US and Russia were to unleash nuclear weapons upon each other.

He sang: “We share the same biology / Regardless of ideology / What might save us, me, and you / Is if the Russians love their children too.”

In many ways, as we approach the 20th anniversary of our freedom as a nation, we are steering a path of mutually assured destruction.

We have children who will vote in this election for the first time who were born into a world of equality without being classified into race groups by apartheid’s population registration act.

Yet today, we have a government elected by the people of this free country who are choosing once again to divide us by race.

They have no legal basis to do so. There is nothing today that prevents any person from declaring themselves to be African even if apartheid would have classified them as white, coloured, or Indian.

What can they do if I tick the box that declares me to be African on the Employment Equity sheet? Can they force me to take a blood test? Or a pencil test? Or any of those other outrages which were perpetrated against our masses for decades?

Race has to vanish from the national conversation. The generation born 20 years ago should not be held accountable for the atrocities of their ancestors.

And so, in the event of my never speaking to you in these pages again, I urge you to take up the cause of fighting against unjust laws that use race rather than poverty as a means test for empowerment.

We have more in common than that which divides us.

I am not the first to say this. I leave you with the words of our nation’s greatest son as he stood before us at the Union Buildings almost exactly twenty years ago:

“Our daily deeds as ordinary South Africans must produce an actual South African reality that will reinforce humanity’s belief in justice, strengthen its confidence in the nobility of the human soul and sustain all our hopes for a glorious life for all.

“Let each know that for each, the body, the mind, and the soul, have been freed to fulfil themselves. 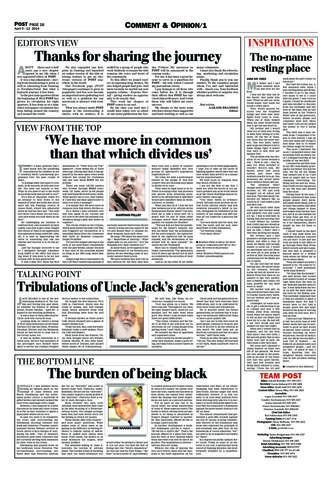