When motives become the news

In 2003, when I was Executive Producer of news at e.tv, we were approached by a high-ranking ANC official with the startling allegation that then National Director of Public Prosecutions, Bulelani Ngcuka, had been an apartheid era police spy.

Given the sensitivity of the allegation, our then Editor-in-Chief, Joe Thloloe (to this day, one of the most respected journalists on this continent), took it upon himself to investigate the story.

Bra Joe traversed the country with a cameraman sworn to secrecy, collated the evidence and testimony from witnesses, and produced a compelling documentary detailing the story.

But we took a unanimous decision not screen it.

The reasons were many, but I will break this down into two broad categories. Firstly, it was clear that the parties feeding us the information had a political agenda seeking to prevent the National Prosecuting Authority bringing possible corruption charges against then ANC Deputy President Jacob Zuma.

Secondly (and to our minds, more importantly), the story failed to satisfy the basics of journalism. There was a single source, no hard evidence, and the strong possibility that we would be tarring Mr Ngcuka with false accusations.

It turned out that others in our profession did not share e.tv’s commitment to journalistic ethics. On 7 September 2003, the story broke in City Press under the heading “Was Ngcuka a spy?”

Within 2 weeks, President Thabo Mbeki appointed a judicial commission of inquiry into the allegations under retired judge Joos Hefer. What emerged from the Hefer Commission report were the following:

The end result of the process was that the Commission found no substance to the allegations against Mr Ngcuka. Judge Hefer also commented on the testimony of the editor of City Press that “I am satisfied that he has discredited himself to such a degree in the newspaper community, that he will not find it easy to procure employment in that field again.”

Many of us have forgotten about the Hefer Commission by now but it’s a useful example of why the basics of journalism matter.

Over the past year, there has been a lot of discussion about the media and the role of journalists in pushing particular agendas.

We have seen the unqualified apology from the current editor of the Sunday Times regarding publication of fake stories.

We have seen the words of News 24 editor Adriaan Basson that “We wanted someone to embarrass Zuma for everything he's done, and Malema comfortably played the role of public accuser number one. … Because we agreed with the EFF that Zuma was bad for the country. He had to go. … We willingly and knowingly parked Malema's own sins in the past.”

So there has been loss of credibility for major media outlets and the role of journalists has come under increased scrutiny. Instead of our focus being on whether journalists are reporting truthfully and factually, we instead now question their motivation in reporting on particular stories.

I’ve been a journalist for 38 years and have trained 100s, starting with the Cape Times in 1997-1999 with the then Argus Cadet School. I set up the eNews Journalism Training Programme at e.tv, and then YFM’s Y Academy where I trained 252 recruits over 10 years. And the core lesson I try to teach is that the best defence of good journalism is good journalism.

My view is that if we stick to the basics of journalism, one can never be racist, sexist, or biased no matter whether we hold those views in our personal capacities. Let me share some of these.

Journalism is about accuracy, objectivity, fairness.

Accuracy means getting the facts right.

Fairness means that one should not bring information into the story not related to the story to try and sway the opinion of the audience.

Journalism is about facts, not speculation.

Look for Kipling’s servants: Who, What, Where, When, Why, and How. If any of those are missing, read no further.

Toss out the adjectives.

Journalism is about fact, but adjectives are about opinion. For example, when you see the word “controversial”, it’s the journalist’s opinion that it is controversial.

What people say is not news; what people do is news.

If a politician says he is going to sue someone, it’s not news until he actually files papers in court. Reporting a threat is just free publicity.

When you see the word “if”, be careful. Speculation is not journalism.

For example, a Sunday newspaper report said: “If (the arms deal investigation is reopened), South Africa could find out how much and whether senior ANC leaders received payments related to the arms deal.”

At best, the sentence should read “If this happens, South Africa could find out whether senior ANC leaders received payments related to the arms deal, and if they did, how much.” By saying “how much” first, it implies that there is corruption.

The fact that an opinion comes from an expert still makes it an opinion. Getting a law professor to express an opinion on a case is less useful than the view of an advocate who has successfully fought such a case in court.

Be careful of stories from a single source, especially if anonymous.

There are good reasons to carry stories from anonymous sources if they are highlighting facts that can be confirmed. Example: if an insider at a bank says money is being embezzled, and there is a bank statement to prove it.

But be wary of reports like this one from CNN: “President Donald Trump has expressed concern that he could be impeached when Democrats take over the House, a source close to the President told CNN Monday.” There is no way of verifying whether Trump actually said this or whether it is someone with an axe to grind or whether the reporter made it up. That’s why courts don’t accept hearsay evidence.

Now if you use these guidelines to assess news reports, you will find that many news outlets fail these basic tests. Don’t let that stop you reading. No matter how flawed, a robust media environment is the best defender of democracy. That’s my opinion, but you may take that as fact. 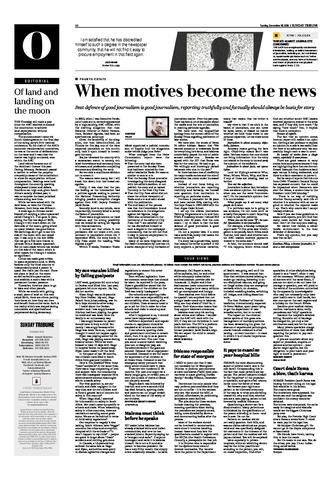