Why let China dictate our lives?

The Chobe River, which forms part of the border between Botswana and Namibia, finally loses its identity when it flows into the mighty Zambezi near the Kazangula ferry. But before it does, it flows around an island which the Namibians call Kasikili and the Batswana call Sedudu.1

The island is tiny – about five square kilometres. It is also fluvial – in the rainy season, it is completely submerged. No one lives there.

But sometime between 1989 (when apartheid South Africa withdrew from the Caprivi Strip) and 1991 (when Namibia became independent), Botswana troops hoisted the country’s flag on the island.

Thanks to diplomatic intervention on the part of Zimbabwe’s Robert Mugabe in his capacity as head of the Frontline States, a full out war between Namibia and Botswana was averted. The dispute was referred to the International Court of Justice, which in 1999 ruled in favour of Botswana but gave Namibia permission to travel unimpeded around the island.

If you can see the logic in two countries being prepared to go to war over a submerged island where no one is ever likely to live, you will be able to understand why China feels so strongly about Tibet; an arid harsh land with an average population density of less than two people per square kilometre.

So it doesn’t matter whether one believes the legend dating to some 400 years BCE that the first Tibetan king, Nyatri Tsenpo was descended from a one-footed creature called the Theurang, and that he had webbed fingers and a tongue so large it could cover his face.

What is true is that that Tibet was ruled by China as a protectorate from 1642 until 1911 when China’s Qing dynasty fell. This provided a window of opportunity for the then Dalai Lama to return from exile and proclaim independence.

Tibet was effectively independent until 1950 when Chairman Mao sent in the People’s Liberation Army to reclaim China’s sovereignty.

China under Mao agreed to allow Tibet’s social structures to remain in place, but began a process of democratisation. The Chinese abolished slavery and serfdom, and began educating the masses. (Schools under the Dalai Lama were the preserve of the elite.)

The CIA began funding a guerrilla army to fight the Chinese as well as fronting a lobby group for Tibetan independence called the American Society for a Free Asia – headed by a brother of the Dalai Lama. The Americans also funded an intelligence operation – headed by another brother of the Dalai Lama. They provided military training and support camps in Nepal, and provided airlifts for paratroopers.

The Dalai Lama fled into exile in India and established a government in exile. Having been soundly defeated militarily, he now became an advocate of passive resistance, leading to his being awarded the Nobel Peace Prize in 1989.

With the halo of “Nobel Laureate”, it’s easy to forget that the Dalai Lama led a feudal empire and received military backing from the CIA to destabilise the Peoples Republic of China. Neither Nelson Mandela nor FW de Klerk were men of peace until peace was negotiated. Barack Obama is also a Nobel Laureate, but ISIS knows well that Obama is no pacifist.

But none of this has anything to do with whether or not the Dalai Lama should be granted a visa to enter South Africa.

We are a sovereign nation, and under President Mandela made it clear to the rest of the world that we would not allow them to dictate to us who was welcome to visit.

Fidel Castro and Muammar Gaddafi and Mohamed Suharto were welcomed into our land even though the West disapproved. The Dalai Lama himself visited our country in 1996 when he met with President Mandela. He visited again in 1999 and 2004 under the Mbeki administration.

But in March 2009, he was refused a visa; nominally, to avoid Tibetan politics intruding upon the 2010 World Cup. He has not been allowed back in since.

His friend and fellow Nobel Laureate, Desmond Tutu, is outraged. Tutu had invited the Dalai Lama to attend his 80th birthday party in 2011, but could not have him there. Now, an opportunity to once again get together has been denied.

Surely we, as South Africans, should be free to invite whomever we choose into our home? Surely Tutu, as our most visible symbol of conscience, has earned the right to entertain his friend? And at very least, if there is a compelling national interest in keeping one man out of our country, President Jacob Zuma as the head of our household, needs to tell us why?

What would Madiba do?

We already know the answer.

• Published in the Sunday Tribune 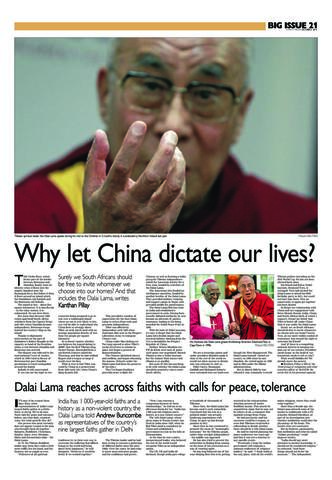