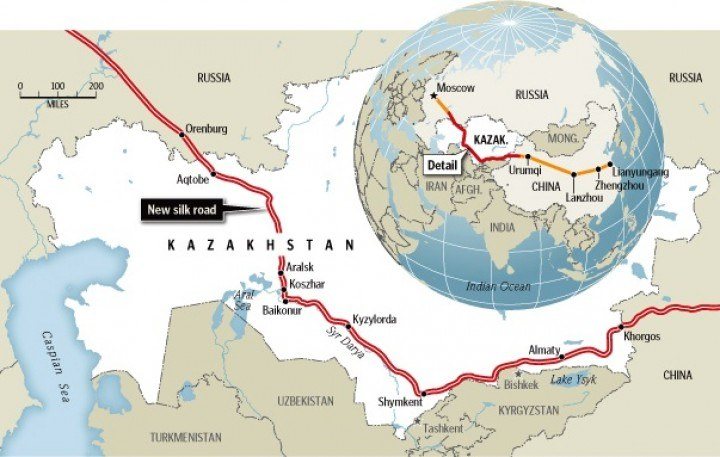 We are not seeing much of this in western media, but this is the most important story in the world right now. Here's why:

1.     Riots broke out following removal of price controls on fuel which saw prices of petrol, diesel, and LNG double.

3.     Kazakhstan president Kassym-Jomart Tokayev has fired the head of his national security agency, Karim Massimov, and had him arrested on charges of treason. Tokayev has taken charge of the agency himself and has instructed security forces to “shoot to kill without warning”

4.     Kazakhstan is a member of the  Collective Security Treaty Organisation  (CSTO), a military alliance of former Soviet states along with Armenia, Belarus, Kyrgyzstan, Russia and Tajikistan. Tokayev has described the riots as a terrorist attack led by foreign agents and has called for military assistance from other members. As a result, the  CSTO has deployed forces to Kazakhstan .

5.     China has pledged support to Tokayev. China’s “Belt and Road” route from Shanghai to Moscow passes through Kazakhstan. The 2 228 km  Kazakhstan-China oil pipeline  carries 400 000 barrels per day from Atyrau in Kazakhstan to Alashankou in China's Xinjiang

6.     Kazakhstan and Russia share the longest contiguous land border in the world — 6 846 km — making Kazakhstan crucial to Russia’s security. If full scale war erupts in Kazakhstan, refugees will flood across that border. About a quarter of Kazakhstan’s populace are ethnic Russians.

7.     Kazakhstan is home to the Baikonur Cosmodrome which was the heart of the Soviet Union’s space programme. Russia now leases the spaceport from Kazakhstan.

8.     Kazakhstan is critical to the planet’s nuclear programmes. The country is the world’s  largest producer of uranium  and — through the state owned entity Kazatomprom — supplies Russia, Japan, China, Canada, India, France, and US company Westinghouse.

9.     Russia has accused western NGOs of fomenting the unrest in Kazakhstan. China appears to agree,  saying : “According to reports, there are 16 000 NGOs active in Kazakhstan, most of them have Western background. The US-based NED almost doubled its grants to Kazakhstan in the last two years. Do these have anything to do with the situation there? An intriguing question.”

10.  Kazakhstan is home to between 11%-20% of Bitcoin miners. The shutdown of the Internet in the country has impacted the Bitcoin hash rate as well as  triggering an 8% drop in value .