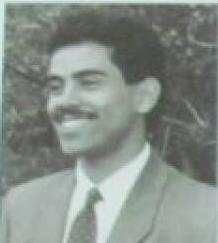 It’s a sum that’s worth noting because on the evening of 21 January 1998 at around 6 pm, three armed men walked into the packed waiting room of Dr Aadil Moerat’s surgery in the township of Gugulethu, Cape Town.

Minutes later, Dr Moerat was dead. The robbers left with R60 which was all the money in the surgery.

(Five people were arrested days later after the community turned an 18-year-old over to the police.)

There’s not much of an online presence recording Dr Moerat’s history. Here’s a brief summary from the University of Cape Town’s medical school campus. As part of UCT’s centennial celebrations in 2012, a conference room in the Barnard Fuller building was named after Dr Moerat .

Aadil Moerat (1964 - 1998) exemplifies what the University would like to see in its medical graduates in their life, work, and social contributions.

While a student he participated in the Progressive Primary Care Network Emergency Services Groups, providing support and first aid training in the townships where political unrest was prevalent, and where casualties of police shooting risked arrest if seeking attention in public clinics or hospitals.

He graduated in 1987 and chose to establish a surgery for patients in Guguletu, where he 'gave his all' to the people he served, becoming fondly known as 'the people's doctor'.

He was shot dead in his surgery at the age of 34 by robbers on 21 January 1998. The conference room reminds the students who use it of the dedication and selfless service of a young doctor.

Today, 2 August, is Aadil Moerat’s birthday. To mark the occasion, I made a donation to the Dr Aadil Moerat Medical Bursary Trust . Here’s what they stand for:

Throughout his studies and into his practice as a medical doctor, Dr Moerat was motivated by his belief in universal health coverage — that all people have access to the health services they need, when and where they need them, without financial hardship.

This bursary in his honour, is intended to contribute to the ideal of a healthy society through the development of health care professionals who share his belief in equity in healthcare and a commitment to community work.

Please join me today. I figure that the price of one tank of petrol is an amount many of us spend almost weekly, so that’s a good starting point. But frankly, I don’t care how much you give as long as you do. This is about recognizing a great human being taken from us way too soon, and continuing his legacy.

If you send your proof of payment to Dr.AadilMoeratMBT@gmail.com , you will get a donation receipt issued under section 18A of the Income Tax Act of 1962.