Look of fondness on Obama presidency

"My name is Ozymandias, king of kings:
"Look on my works, ye Mighty, and despair!”

It was a reflection on the life of the Egyptian Pharoah, Ramesses II, of which Shelley intoned:

Nothing beside remains.
Round the decay
Of that colossal wreck, boundless and bare
The lone and level sands stretch far away.

Shelley’s words always remind me that the measure of the legacy of any leader lies not in what he or she has achieved but rather the extent to which those achievements endure through history.

Barack Obama has given his last public speech and delivered his last press conference. He, Michelle, Sasha, Malia, Bo, and Sunny will shortly move out of 1600 Pennsylvania Avenue, Washington, DC 20500. Using Ozymandias as a measure, how will Obama’s presidency stand the test of time?.

Four years ago when Obama was standing for re-election against Mitt Romney, I took a look at the list of promises he had made in the build-up to his first election. I found an astonishing list of promises kept: 179 of them.

Here are some of those I found significant:

But are any of these likely to have a significant impact on the course of history?

The killing of Osama bin Laden, in hindsight, is almost a non-event. Bin Laden ended his days as a sad figure of a man watching pornography in an isolated building in Abbottabad; never able to venture outside to sample the magnificent beauty of the Kashmir surrounds. Obama received no credit for this in his reelection campaign. Al Qaeda’s legacy lives on in a myriad of suicide bombers and other fanatics including the Islamic State. Score: 0

Reversing restrictions on stem cell research simply brought the US in line with the rest of the world. Singapore, Japan, Israel, India, China, and Iran (yes, Iran) have leaped ahead of the rest of the world. Obama simply allowed the US to play catch up. Still. The US has the most vibrant scientific community, and setting them free is good for the human race. Score: 1

Obama did sign into law the closest thing the US has to a universal health care bill. It is nowhere near the level of support for public healthcare one gets in most first world countries (or South Africa for that matter). Nevertheless, it has whetted the appetite of the US underclass for affordable health care. Even if the Trump administration scales back on some of the benefits, that door can never be closed again. Score: 1.

On gay rights, which was always a contentious issue for the US electorate, Obama acted passively by allowing all legal challenges to pass through the courts without opposition from the federal government. Nevertheless, the right of LGBT individuals to marry whom they choose and have equal protection under law is never going to go away in the US. Also, Obama took this onto the world stage with then Secretary of State Hillary Clinton telling the UN that the United States would use diplomacy and aid to help expand the rights of gay people around the world. Score: 3.

On the release of presidential records, the Obama administration did not increase transparency, but did increase surveillance. State sanctioned spying means that most US citizens have almost no privacy under law. Score: –2.

On the issue of Cuba, Obama went many steps beyond his promise by opening up diplomatic relations with that state after 50 years of unremitting hostility. In part, I’d like to think that President Nelson Mandela’s funeral afforded the opportunity to open that door. Score: 3.

On the question of ending the war in Iraq, Obama largely kept his word by withdrawing the bulk of US forces from active engagement. Islamic State remains a clear and present danger for now, but Iraqi self-determination is now inevitable. Score: 1.

The Lily Ledbetter Fair Play Act of 2009 signed by Obama stripped away the right of companies to legally pay less to women working the same jobs as men. In even a decade from now, the idea that companies could get away without equal pay for equal work will seem ludicrous. Still, Obama opened up that door too. Score: 1.

Obama was not able to shut down the US torture facility at Guantanamo Bay, Cuba. It was not for lack of trying, but the Senate and Congress consistently blocked him. Nevertheless, he did end the use of waterboarding and removed the majority of prisoners from the facility. Score: 1.

Obama managed to right one of the great wrongs of US history, which was the isolation of Iran. Understand that until the 1950s, Iran was a thriving secular democracy and one of the intellectual and cultural heartlands of the world. Two US engineered coups toppled those democratic governments leading to the revolution and the terrible reign of the Ayatollahs. Obama, by use of technological warfare and sheer diplomacy engineered the re-entry of Iran into the family of nations while putting the brakes on their nuclear ambitions – without firing a single shot. Score: 3.

So I agree with Obama that, by almost every measure, the US and the world are better places today than they were before he took office.

However, his greatest failure was his inability to take the lessons of his own presidential campaign and use it to cement his legacy.

I believe the reason why Barack Obama was elected in the first place was because he was an outsider. Unlike Hillary Clinton and John McCain, Obama was not anointed by the military industrial complex and so struck an honest chord with the voters. (People who accuse the US population of being racist are blinkered. An overwhelming majority of Americans voted for the black candidate twice.)

He had no doubt been convinced that Hillary was the certain bet, and would cement his legacy projects such as health care and sustainable energy.

Hillary, as the soulless representative of Wall Street was never going to resonate with the voters in the way Obama did for two elections. Simply put, if every person who voted for Obama had voted for Hillary Clinton, she would be president elect today. Obama asked them to vote for her. They did not.

I predicted Trump’s victory in a tweet in July 2016. I believe he will be a better president than people give him credit for.

But I also believe Trump will make us look back on the Obama presidency with great fondness.

Published in the Daily News 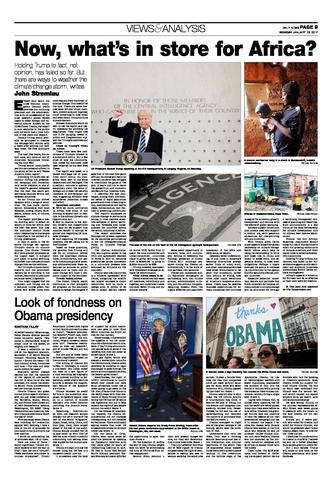