"Usurpers always choose troubled times to enact, in the atmosphere of general panic, laws which the public would never adopt when passions were cool."

It’s a quote from 18th century philosopher Jean-Jacques Rousseau and comes to mind because 18 years ago this month, the 9/11 terror attacks on the United States brought the world to a standstill.

Barely a month after the attacks, US President George W Bush signed into law the “Uniting and Strengthening America by Providing Appropriate Tools Required to Intercept and Obstruct Terrorism Act of 2001” on 26 October.

The US was already steering one of the world’s largest surveillance programmes since the 1970s — the Five Eyes alliance comprised the USA, UK, Canada, Australia, and New Zealand. The September 11 attacks provided the opportunity to dramatically expand the scope of spying.

The “USA Patriot Act” passed by an overwhelming majority. It allowed indefinite detentions of immigrants; permission for law enforcement to search a home or business without the owner's or the occupant's consent or knowledge; and allowed the FBI to search telephone, e-mail, and financial records without a court order.

The Patriot Act was supposed to last only for four years until December 2005; ostensibly while the threat of terror attacks was brought under control. Instead, it was renewed twice under Bush, and again in 2011 by his successor, Barack Obama.

Political commentators frequently say, “When America sneezes, the world catches a cold.” This was certainly true in the case of the Patriot Act. The US government was not content to only spy on private conversations within its borders; it put pressure on countries around the world to enact similar legislation.

So in 2002, our government under President Thabo Mbeki dutifully complied and tabled the Regulation of Interception of Communications and Provision of Communication-related Information Act. “Rica”, as it is now known, became law when gazetted in January 2003.

Most of us think of Rica as an annoyance when we need to buy a new SIM card for our mobile phones. Few of us stop to consider that it is a way for the State to associate a phone with an individual and so to snoop on their conversations. It also compels mobile telephone operators to keep track of all phone records for extended periods.

Unlike the USA Patriot Act, Rica had an element of protection built into it; before law enforcement authorities can tap our phones or access our phone records, permission needs to be obtained from a judge who will grant such permission only for valid law enforcement reasons.

In practice, this turned out to be useless. It was easy for the State to simply lie as to the reason for wanting to tap a phone and the judge had no way of verifying whether the request was legitimate.

Sam Sole, managing partner at the amaBhungane Centre for Investigative Journalism, suspected in 2008 that his communications were being monitored. His suspicions were confirmed in 2015 when then president Jacob Zuma’s lawyers submitted transcripts of conversations between Sole and NPA prosecutor Billy Downer in the court case for the release of the “Spy Tapes”.

In April 2017, amaBhungane and Sole filed application to the Pretoria High Court to strike down Rica as inconsistent with the Constitution’s right to privacy enshrined in the Bill of Rights. The matter came before court on 4 June 2019.

The application said Rica failed to prescribe procedure for notifying people they were being spied upon or procedure to be followed by state officials with access to that information. The procedure for appointing a judge did not ensure the judge’s independence. Rica did not protect lawyers or journalists.

This week on 16 September 2019, Judge Roland Sutherland handed down judgement in the matter handing down six orders finding in favour of amaBhungane and Sam Sole. The orders effectively declare Rica to be invalid, but the order is suspended for two years to allow Parliament to fix the law.

So what does this mean in practice?

Anyone who has been spied on through his or her communications needs to be informed within 90 days of the expiry of the warrant.

“Bulk surveillance activities” are now illegal. (Advocacy group Right2Know approached the telecommunications service providers for details of how many such authorisations had been served on them. In 2017, R2K released figures showing that law enforcement agencies were spying on 70 000 cellphones.)

“Foreign signals interception” is now unlawful. This is a broad category that includes such things as WhatsApp, Skype, Facebook where the signals pass out of the country.

The judgement says the State Security Agency can no longer “mine internet communications covertly”.

I expect the State will challenge the judgement. Their defence will be that drug traffickers and child pornographers will now be able to hide.

But before you agree with them, ask yourself how many child pornographers have been brought to book by our elected government spying on law-abiding citizens? And then remind yourself of those words of Jean-Jacques Rousseau. 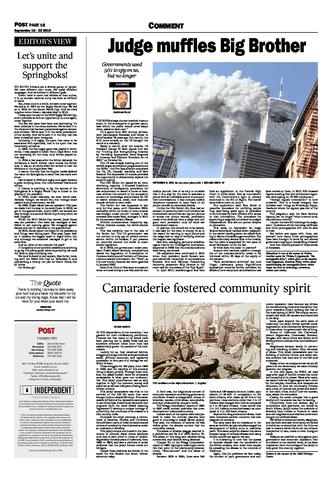