Spend our way to prosperity

“Hope is good but it is not a strategy,” Finance Minister Tito Mboweni said when he delivered the Medium Term Budget Policy Statement in Parliament last week.

He was quite right. The markets reacted with brutal forthrightness as the rand immediately lost more than 50c against the US dollar.

On Friday, Moody’s — last of the ratings agencies to maintain an investment grade rating for this country — downgraded the economic outlook from “stable” to “negative”.

To understand why this is a bad thing, think of our country as a person who has maxed out his overdraft, He then begins spending money on his credit card to survive. That’s pretty much where we are at the moment.

The fearful part is what happens if the credit card gets cancelled? The only way one can get credit in that scenario is to go to a loan shark.

I’m going to repeat that: we are paying about R1-billion, every single day, in interest.

Immediately after the minister delivered his speech, my fellow media pundits were quick to proffer a solution: “We need to cut costs,” they chanted, pointing to a bloated public sector wage bill which swallows about a third of our national budget.

They are partly correct. Yes, our public sector wage bill is too high and cutting back on that will free up money to pay off debt.

But cost cutting alone is not going to get us out of our hole. Once inefficiencies have been curtailed, further cost cutting actually hurts us. As a late friend of mine was fond of saying, it’s like cutting off your arm and saying: “Look! I’ve lost weight!”

In other words, we need economic growth.

Early in September, Treasury released a paper titled “Economic Transformation, Inclusive Growth, and Competitiveness: Towards an Economic Strategy for South Africa”. (I referred to this paper at the time as Project Tito.)

The Finance Minister referred directly to this paper in his speech last week. He highlighted reforms required to raise growth. This time around, I was drawn to focus on what he referred to as “reforms which do not require significant state resources”.

Some of these were:

Now each of these measures might not seem significant, but taken together, these can make a massive difference.

Let’s use telecommunications as an example: World Bank studies have shown that a ten percent increase in broadband penetration adds between 0,9-1,5 percentage points to GDP

A businessman of my acquaintance, who too had studied economics at Princeton, pointed out that each of these four steps, if implemented immediately, could each contribute one percent of GDP in four to five years time.

So assuming government has no appetite for cutting government jobs, but is happy to freeze the wage bill at its current levels, that gives us a path to make serious inroads into paying off our debt in the near future.

But we still need to get through the next five years. How do we do that?

The answer, I believe, is to spend our way to prosperity.

In 1936, John Maynard Keynes wrote a significant book, which disagreed with prevailing wisdom that markets self correct in the long term. “The General Theory of Employment, Interest, and Money” suggested that when consumer spending falls, government should stimulate the economy by injecting money into the economy.

Keynesian economics was put into practice by Bill Clinton during his tenure as US president from 1993–2001. He raised taxes on the wealthiest 1,2% of citizens, but slashed taxes for 15 million lower-income families. The result was putting $21-billion directly into the pockets of these families, and they promptly spent it.

Keynes’ model says that this action causes what he referred to as a multiplier effect. Middle class people with disposable income spend money at businesses. These businesses then have more money and they can hire more people to meet the increased demand, which in turn increases spending.

So my advice to Tito Mboweni is simple: when the February budget comes along, leave the half-million wealthiest taxpayers at their current bracket, but slash taxes on the 7 million middle class taxpayers by R100 billion.

The middle class will spend the money, triggering the multiplier effect. Economic growth will ensue, bringing in more tax revenue.

And Moody’s will be happy. 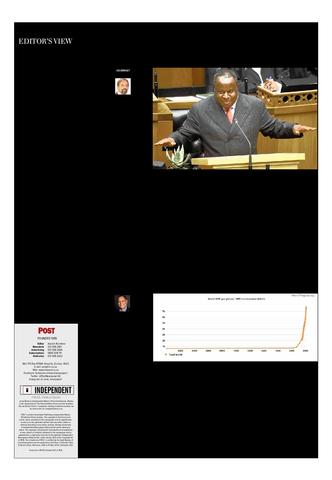